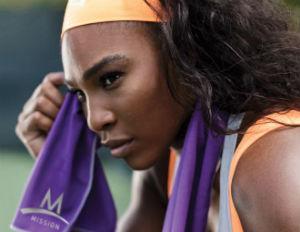 Last Saturday, I had the pleasure of taking my son to Kid’s Day at the U.S. Open. Like everyone else in the audience, we erupted into applause and shrills when Serena Williams came onto the court to charm the adoring crowd.

Even before her appearance, the crowd was buzzing with talk about the fact that we may all be on the brink of witnessing her make history by becoming just the 6th person, male or female, to win all 4 major tournaments –Â the Australian Open, French Open, Wimbledon, and the U.S. Open – in a single calendar year. This hasn’t been done since Steffi Graf dominated the grand slams in 1988 when Williams was just six years old.

It wasn’t just the crowd at the Open. The excitement that Williams has generated across the globe has arguably made her the most recognized athlete on the planet. While she ranks first in the popularity rankings, she ranks last in the rankings of tennis players on Forbes‘ list of the highest-paid athletes, and ranks 47th overall.

When asked about the discrepancy in a recent New York TimesÂ Magazine article, Williams said “If they want to market someone who is white and blond, that’s their choice,” adding that, “I can’t sit here and say I should be higher on the list because I have won more…I’m happy for her, because she worked hard too. There is enough at the table for everyone.”

Martin Morse, CEO of the MM Group, which provides financial and business mentoring to elite athletes and high-profile celebrities, says Williams can wield more financial power than she may realize she has.

“From a money standpoint, she’s worth at least 3 times more from an advertising standpoint [than] what she’s getting,â€ says Morse. “If she doesn’t demand that and make a stink about it, the executives at Nike certainly aren’t going to. It’s easy money for them,â€ he adds.

“If I were the most dominant player in the world, I would be mad. It’s that mentality.Â  She could simply say, ‘this is what I’m worth. I’m not going to sign with Nike again unless I’m getting what I’m worth. I dominate this sport.’ She’s got that kind of leverage.â€

Morse and others in the industry say there may be gender and cultural conditioning issues at play that unconsciously leave women and minorities willing to accept less than they’re worth and not fully understand their brand from a financial standpoint.

In addition, Morse says when it comes to Sharapova, advertisers are also paying her what they feel the market is dictating.

“Their market data dictates this. It’s a lot easier to pull the trigger on a sure fire bet.Â  A blonde, blue-eyed girl fits the profile that more of the people who play tennis [can relate to] . . .â€

Maria Sharapova pulled out of the U.S. Open due to an ongoing knee injury. Serena Williams has won her early rounds and continues to march towards an historic same year ‘Serena Slam.’ As Williams said in the New York TimesÂ Magazine story, “I also play and represent something much greater than me. I embrace that. I love that. I want that,â€ recognizing the significance of her platform and, hopefully, the ways in which she can be a role model when it comes to getting equal footing on the monetary side of the equation.