This Founder Transformed His Hustle Into a Powerful Personal Brand and Business -- Now, He's Giving Back 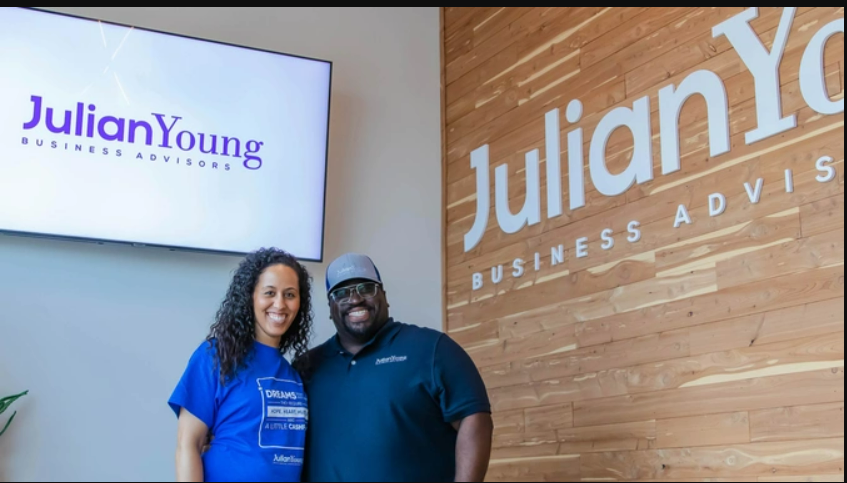 Disclaimer: This story has been republished with permission from Entrepreneur.com

Julian Young saw a bag of drugs being sold for the first time when he was 8 years old growing up in North Omaha, Nebraska — a truth that would come to define his life and career in more ways than one.

As a teenager, Young had an entrepreneurial mindset. But school didn’t feel like a place where he could put it to use, he says. So by the time he was 16, he was selling drugs, and he ultimately found himself facing more than 15 years in prison as a result.

“I had an ultimatum,” Young recalls. “I could change my life, or I could continue on the road that I was on and possibly end up spending a large part of my life incarcerated. And I didn’t want that.”

Fortunately Young had a mentor in one of his professors at Wayne State College, who believed he was an entrepreneur and told him so. Young had no idea what that term meant at the time, but with his mentor’s encouragement, he started to learn more — and kicked off his journey to co-founding several powerful social impact initiatives.

“I wanted to use entrepreneurship to tap that talent that goes overlooked and underdeveloped — because that’s my story.”

Young joined a student business organization known as SIFE (Students in Free Enterprise) and went on to become president of his college’s chapter. Now called Enactus, the organization is an international social entrepreneurship project that aims to create change in communities.

“I had the opportunity to be exposed to other successful executive CEOs, business owners, people that had started and grown successful multimillion-, billion-dollar businesses,” Young says.

Young began to see himself in their shoes — and it changed his life.

“I wanted to use entrepreneurship to not just help people who had already started businesses and were in the process of growing a business but also to tap that talent that goes overlooked and underdeveloped — because that’s my story,” Young explains.

In the beginning, that meant encouraging people to dream, regardless of their economic status or background. “No one is ever too poor to dream,” Young says. “No one — everybody can afford a dream.” He made sure people knew that their dreams are valuable, with the potential to solve real problems and change lives in the process.

Young and his wife Brittany co-founded a nonprofit organization, initially known as The Start Center for Entrepreneurship, in 2012. The goal was to teach entrepreneurial fundamentals to aspiring minority small business owners. But Young struggled to gain substantial traction for his venture. He knew he needed help — so he started to ask for it.

“He’s been a vital part to what we do, and he’s my mentor to this day.”

One of Young’s initial contacts was Don Eckles, co-founder and chairman of the board of Omaha-based franchise Scooter’s Coffee. Eckles and Scooter’s invested $500,000 to set up a coffee shop in an old bank building in North Omaha; it doubled as a space for Start Center programming.

Another mentor to whom Young owes his success? Tom Osborne, former head coach of the Nebraska Cornhuskers and founder of the TeamMates Mentoring Program. Young tried to arrange a meeting with Osborne for nearly two years, but he finally caught up with him in 2014 — at an airport before Osborne was leaving the country for two weeks.

“I shared with him my vision for what I wanted to do through entrepreneurship and how I wanted to impact my community, the world and the Black community,” Young recalls. “And he absolutely loved it.”

Osborne helped Young build his idea and guided him to narrow down his passion for maximum results.

“If he didn’t help me, there’s no way I’d be where I’m at,” Young says. “He disagrees; he says I would’ve figured it out, but I think that’s just the humility in him. I know that he’s been a vital part to what we do, and he’s my mentor to this day. I spend time with him; I run my ideas past him. And he takes the time to see where we are, uses his network, advice and mentorship to continue to help us grow and build what we’re doing.”

Today, that looks like a rebrand of The Start Center, now known as the Julian and Brittany Young Foundation. The reason for the change is simple, Young explains: Although the organization began as a place, with leases in different spaces, it’s since evolved into an idea. Now, when people call for information about their programs, they ask for Young and his wife by name.

“We are helping so many entrepreneurs not only start but also grow businesses.”

The Julian and Brittany Young Foundation will still offer classes on entrepreneurship through its program called Start, but it will also go a step further into advocacy, striving to shape policy and educate elected officials on the unique challenges that small, minority-owned businesses face. The foundation will also offer grants to small business owners as it continues to expand.

The Youngs have established the Small Business Resiliency and Recovery Plan, formerly known as the Urban Wealth Initiative, to help give minority- and Black-owned businesses the resources and education they need to go as far as they possibly can.

Essentially, the foundation operates with a “one-two punch” approach, Young says. The nonprofit arm helps fledgling entrepreneurs get their businesses off the ground and is complemented by the for-profit side, Julian Young Advisors, which offers more advanced paths to growth.

“It’s an opportunity for entrepreneurs who want the next level in service in terms of a paid advisor, a consultant, someone to work with them throughout a longer tenure and process in their business,” Young explains. “And they’re looking for a lot of those wraparound services that are needed to actually grow and become sustainable.”

For many hopeful entrepreneurs, the time is now. The pandemic and the Great Resignation have galvanized aspiring business owners to act like never before. In fact, the Youngs’ client base has doubled during this tumultuous period — on both the nonprofit and for-profit sides.

“[It’s] going extremely well,” Young says. “We are helping so many entrepreneurs not only start, but also grow businesses, and many of them are moving on to their second location in businesses. We’re watching entrepreneurs be able to buy their first home and begin to invest in real estate, and all of this has come from one business that they’ve started — the ripple impact is so amazing.”

Over the years, Young has come to appreciate just how powerful that ripple effect can be. It’s a lesson that goes back to some invaluable advice his grandfather gave him once: The most important thing you can have is your peace, but you can’t be a person of peace if you don’t have patience.

“If it wasn’t for that [advice], I would’ve tried to keep pushing through doors when it wasn’t time to go through those doors,” Young says. “And I would’ve given up when I thought it was time to give up. Patience has not always been a pleasant teacher, but it has definitely been the most fruitful teacher I’ve had.”