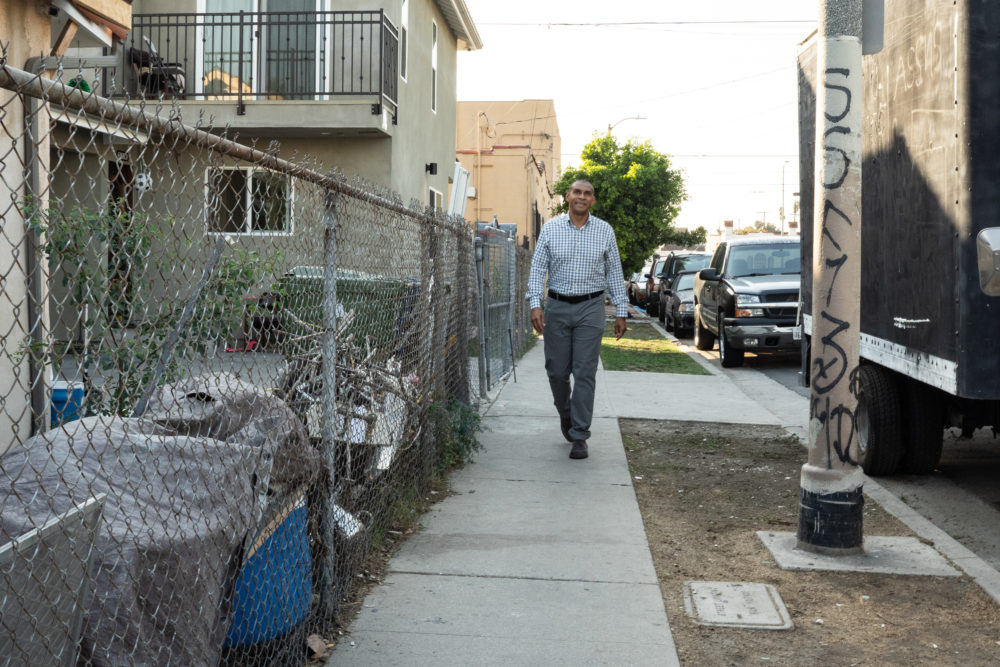 Entrepreneur and ace investor Martin Muoto is using one of the most potentially lucrative concepts in real estate to make a difference in his community: Opportunity Zones.

The founder and managing partner of SoLa Impact, Muoto, and his Los Angeles-based social impact fund has raised over $165 million to provide mainly multi-family housing to largely low-income African American and Hispanic residents in Watts, Compton, and South Central since 2014.

The fund acquired and rehabbed 1,500 units into those communities and plans to build another 1,500 during the next two years using private capital. Community groups have committed to offering social services like financial literacy, drug rehab, and career counseling to tenants.

“The opportunity zone legislation provides incentives for investors to invest in these communities and receive superior tax-advantaged returns,” Muoto says.

Started in 2012, SoLa Impact focuses on offering market returns to investors while modernizing historically tough urban areas in America. Muoto launched it after realizing a void of housing in Los Angeles for hardworking people who wanted to have safe and decent places to live. He achieved that by finding private capital investors willing to make such an investment in the neighborhoods.

His firm’s motto is “Doing Well by Doing Good,” something the SoLa Impact Fund uses as a growth strategy to attract investors. The firm this year presented $100,000 in college scholarships to mainly black and Hispanic students in the community, a tenfold increase from a similar contribution in 2018.

Now, Muoto hopes to make a big social impact in Los Angeles with the Beehive, an ambitious project he calls the nation’s first business campus for opportunity zone companies. It will allow minority and women-owned businesses to work and network with other entrepreneurs and investors on the four-acre campus in South Los Angeles, about 10 minutes from downtown Los Angeles, that is being revitalized.

In 2020, the company plans to raise another $50 million to $75 million to expand the Beehive. The firm has invested about $20 million into the project, including $14 million to acquire six warehouses that house the Beehive. It will be the first venture for Muoto’s firm beyond affordable housing. Its facilities will allow tech entrepreneurs, local businesses, and startups to launch enterprises. The Beehive aims to draw established companies that want to invest in the community.

“We’re open to attracting the likes of Google and Apple as well as minority companies,” Muoto says.

Opportunity zones have been controversial and received mixed reviews since they sprouted up as part of the 2017 Tax Cuts and Jobs Act. They allow investors to defer tax on any capital gains until 2026 and avoid a capital gains tax on the sale of an Opportunity Zone. Those funds are then invested in property and businesses located or operated within the designated QO Zones.

Experts say the investments are designed to accelerate economic development in almost 9,000 designated areas in America and Puerto Rico. Supporters say Opportunity Zones could mean billions of dollars poured into poor areas nationally, creating economic development and jobs for residents in distressed areas. Yet, critics argue Opportunity Zones, perhaps, are a way for the wealthy to get richer. They argue the affluent get tax breaks developing projects in poor areas favorable to them, raising uncertainty about how low-income residents benefit.

A man with a vision

Muoto spoke with  BLACK ENTERPRISE about his company, its growth plans, and Opportunity Zones:

Some community advocates have criticized opportunity zones. They contend opportunity zones often fosters gentrification and rising prices for housing in some neighborhoods for current low-income residents and minority groups, forcing them to leave those areas. What has your firm done or is doing to overcome such concerns in South Los Angeles?

Nearly all of our residential projects in opportunity zones will be 100% affordable housing, that will be available to the low-income residents we currently serve. Currently, over 98% of our tenants are racial minorities; two-thirds are low income, with nearly 1 in 3 of our placed tenants have been homeless at some point in their lives. At the same time, South LA has been changing for some time and will continue to change with or without Opportunity Zones. Our goal is to promote initiates such as The Beehive and the South LA Tech Center, which will provide jobs, training, and financial opportunities for South LA residents.

What amenities will the Beehive include as it caters to social and innovative entrepreneurs?

The Beehive will have a lot of amenities, which have been historically lacking in South LA, including a number of on-site restaurants, a full gym, shared outdoor and event space—including food truck nights, a local farmer’s market, and events for local artists to perform and display their craft. We will offer shared conference rooms, co-working and flex spaces, and creatives offices. We also have free and discounted accounting, legal, and compliance services for the Opportunity Zone businesses located in the Beehive.

Why is the Beehive the primary focus for your company at this time?

Our primary focus has always been ensuring that the community shares in the wealth created by the OZ legislation, and the Beehive is just one—but an important part—of that. In order to create wealth, you have to catalyze economic development, entrepreneurship, innovation, and job creation. We believe the Beehive will create hundreds of quality jobs by attracting companies that want to invest in South LA.

Your firm is working on many new initiatives beyond the Beehive, including a Tech Center in South Los Angeles. What are the plans for that center?

The $1.5 million SoLa Impact eSports and Tech Center will use eSports, gaming, and coding to bridge the digital divide between African American and Hispanic youth and their non-minority counterparts. We plan to provide a 5,000 square-foot safe space that can be thought of as a “tech-YMCA”. We believe the Tech Center will teach good sportsmanship, team building, and similar life skills that traditionally were gained from team sports. It is important that black and Hispanic kids learn the technology skills to thrive in an increasingly technology-driven world. The center is expected to open by late 2020.

In 2028, Los Angeles will host the Olympic Games. What is your company doing now to gear up and profit from that global event?

LA is making some incredible investments in public infrastructure ahead of the Olympics in 2028 and we want to ensure those benefit South LA in particular. Particularly important is the investment in public transportation, and we are working with the City to ensure more rapid bus and light rail lines connect throughout South LA, increasing access to job and economic mobility. In addition, we strongly believe the Olympic Committee must be committed to diversity in their suppliers and sourcing from local small businesses. [Muoto expects his firm’s projects to indirectly benefit from the Olympics through initiatives such as improved public transportation.]

How do you convince investors to spend their money on your opportunity zone projects instead of others across America?

We have been investing in opportunity zones before they were Opportunity Zones. Unlike many OZ funds, we are not moving into these neighborhoods without understanding the communities in them. Ultimately, investors want an operator that understands how to develop, own, and operate in the neighborhoods they are investing in. We have demonstrated SoLa’s strong track record in South LA well before Opportunity Zones were introduced.

What are among the biggest challenges you and your firm face in convincing investors to invest capital into your opportunity zone ventures?

A common misconception we have to overcome with investors is that you don’t have to accept lower returns in order to make a strong social impact. We strongly believe socially responsible investing actually improves returns. Fortunately, we have the track record to prove that point. A lot of the narrative out there is that opportunity zones (OZ) are just a tax break for the rich. In reality, OZs have the potential of bringing billions of dollars to communities that have been starved for capital—these are often urban, African American communities.   However, it is unfortunate that a lot of OZ funds appear not to focus on true social impact. So some investors are skeptical that you can have both social impact and market-rate returns. We strongly believe socially responsible investing actually improves returns. Fortunately, SoLa Impact has a very strong track record demonstrating both social returns and financial returns; and ultimately, that is what investors are looking for.

What would you like black investors to know about the Opportunity Zone legislation?

We feel that the Opportunity Zone legislation provides strong incentives for investors to “give back” to their communities. We hope successful African American and Latinx investors seize the opportunity. We have several black investors and advisers, such as Baron Davis, an NBA All-Star and serial entrepreneur, who have helped SoLa shape our community engagement. Davis grew up in South Central LA before leading a very successful career in the NBA and recently became involved with SoLa Impact. Muoto emphasizes, “It’s very important that folks from the community have a seat at the table when decisions are made about how these investments are made.”

Given your experience, what advice would you give black entrepreneurs before taking the plunge into the opportunity zone business?

Jump in. With both feet. Now. The Opportunity Zone legislation is a once-in-a-generation opportunity that can potentially create real wealth for black entrepreneurs and the black community. We—as minority entrepreneurs—need to be leading and setting the agenda in our communities for what types of businesses, what types of business models, and what products and services can be provided.