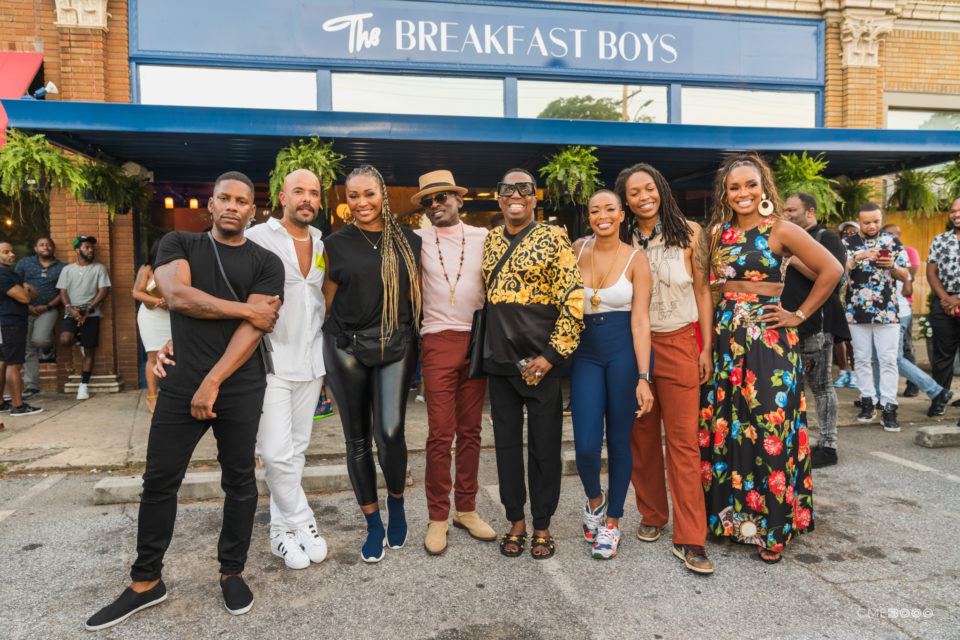 It’s not every day that you find three Black men collectively on a mission to introduce an “elevated Black dining experience” into the ecosystem of a very competitive restaurant market in Atlanta.

But partners Gee and Juan Smalls of ‘The Breakfast Boys’ (Virgil’s Gullah Kitchen), have partnered up with veteran restauranteur Lorenzo Wyche (Gocha’s Breakfast Bar, Rock Steady, Breakfast At Barney’s) to introduce an eclectic breakfast/brunch spot in historic College Park that delivers on a niche food experience.

On Monday, the dynamic trio kicked off their grand opening celebration with reality TV personality, Cynthia Bailey hosting alongside the City of College Park, GA Mayor, Bianca Motley Broom, Gary With Da Tea from Dish Nation, Terrence C. Carson of Living Single and a number of other celebrities.

The all-day breakfast/brunch experience promises to be a “whimsical superb service, with awesome food and a little bit of something for everyone that fits every taste bud,” Juan said.

With rich and robust dishes like Jerk Chicken & Sweet Potato Waffles to down-home staples that give southern savoir-faire like Crispy Catfish, Shrimp & Grits, paired with peach cobbler lattes and passionfruit mimosas, the Breakfast Boys are introducing a gastronomic wonderland to their diners with their lip-smacking cuisine.

“Our goal here is to deliver a better brunch experience,” said Wyche, a famed restauranteur who was behind Sean “Diddy” Combs’ restaurant Justin’s in Atlanta.

“Right now in Atlanta, everything African American, restaurant driven, is a little one-sided in my opinion,” Wyche said during a private media gathering this past weekend.

He went on to explain that long lines outside of a restaurant with people waiting in the heat to get inside for a seat is not something he’d like to see happen anymore. “So we’re working on service to make sure that’s not there,” he said.

Gee, Juan and Wyche’s business partnership is a blueprint to Black entrepreneurship at its finest by finding a unique business opportunity and using the power of their network to open up an opportunity that has increased their net worth.

During an interview with BLACK ENTERPRISE, Juan and Gee shared how their business Virgil’s Gullah Kitchen survived through a pandemic so much so that they were able to capitalize on the moment and bounce back by opening a new venture, thus birthing The Breakfast Boys with Wyche.

“The community really rallied behind us and just poured out the support,” said Gee about surviving the pandemic with their first restaurant Virgil’s, which specializes in cuisine native to the Gullah Geechee people, who are descendants of Central and West African people.

“We are really grateful we made it and are thriving. Virgil’s is doing better than it ever has. It’s profitable,” he said.

But it wasn’t an easy road. Gee said having to shut down and open back up in phases while offering only take-out was tough. And couple that with the difficulty of hiring a dedicated staff, proved to be even more of a challenge. But the two said the government’s PPP loan assistance helped them to pay off debts, they incurred while opening Virgil’s.

Wyche had been a business consultant to the couple for the past few years, so, when the opportunity presented itself to partner and open the Breakfast Boys, they seized it.

“So chef Lorenzo, the Breakfast Boys is kinda his brainchild. He was one of our mentors with opening Virgil’s,” Gee said. “We kept in touch over the years. We just had great chemistry. So the opportunity presented itself for us to partner together and this space became available,” and a business relationship was born, he said.

Sometimes even when business owners have great concepts, it doesn’t always turn into dollars. About 20% of U.S. small businesses fail within the first year, according to data from the U.S. Bureau of Labor Statistics. And oftentimes it is because of lack of leadership or solid connections to secure good locations or needed funding in order to elevate the brand.

And let’s face it, there’s already a hot market for food spots in Atlanta so it’s not always easy to successfully execute an idea from isolation to see its evolution and eventually its grand opening.

However, Wyche, Juan and Gee are the men – ahem – Breakfast Boys, who seemingly made magic happen.

You can visit EatatBreakfastBoys.com for more info.