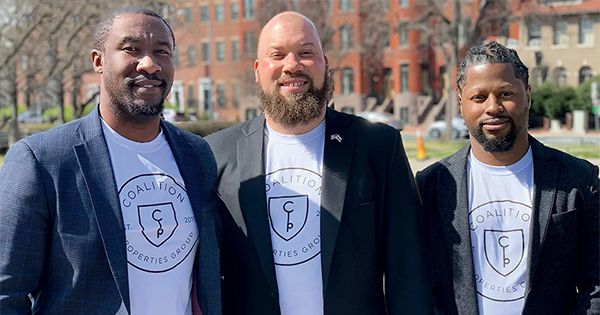 Three black entrepreneurs have joined forces to create a real estate firm called Coalition Properties Group (CPG). Harrison Beacher, Ryan Butler, and Keith James decide to merge their firms and in less than a year are already on track to reach $100 million in closed deals.

The three friends were all successful in their own right prior to teaming up and creating the firm, but they decided it was better to band together rather than compete against each other.

Butler was an owner of an IT consulting firm and was involved in real estate prior to teaming up with his friends. James purchased his first property at the age of 23; he went on to become a full-time realtor and closed $20 million in deals. Beacher is the national director of the National Association of Realtors, which has more than 1.2 million members. He was also featured in Realtor Magazine‘s 30 under 30 in 2016.

CPG has also been holding free wealth-building seminars as part of a goal to create a community and to sustain long-term legacies. They teach individuals and families how grants and different financial opportunities allow for purchasing a home with little or no money down. CPG also plans to host a series of career nights for people considering a career in real estate and what it takes to be a successful realtor.

“Whether you’re volunteering, giving back, or connecting with others, these relationships are vital in not only building your business but also learning how to better help your clients achieve their goals,” Beacher said via Instagram.