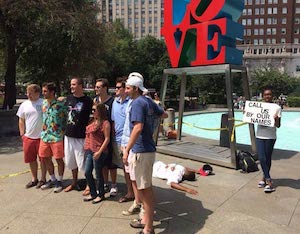 Last weekend, the protests against the villainy that happened in Ferguson, Missouri, took root at Philadelphia’s iconic LOVE Park statue, as a performance artist hoped to make a statement.

Keith Wallace portrayed Michael Brown, murdered and motionless on the ground, as tourists ignored the message and instead took selfies in amusement of the demonstration.

Centered around the hashtag #CallUsByOurNames meme that was trending on Twitter in the wake of Brown’s death in Ferguson, Wallace appeared to be lifeless with fake blood and bullet holes done up to recall Brown’s image. The aim was to ensure that the performance would “make an impact on what was perceived as the Civil Rights movement of a new generation.”

Instead of acknowledging the artist’s merit and intention, viewers of Wallace’s protest didn’t appear uncomfortable at all. Tourists and Instagram-happy personas were more oblivious to the performance, as they posed for pictures in front of the legendary LOVE statue, totally ignoring Wallace and Colston.

The opportunity to begin a deeper discussion on the events that have devastated the small Missouri community recently was left on the cutting room floor, as most chose to ignore–or, worse, mock the occasion. “C’mon, man, he’s already dead,” one observer noted as a group of friends tried to incite another to join the picture party.

Many chose to take selfies with Wallace’s bloodied body in full view, which would normally give people a reason to pause. It wasn’t all negative, as Colston told Phillymag’s Victor Fiorillo of one positive moment that occurred, “There was a Latina woman with two young boys. She held her boys’ hands and said to them, ‘I want you to see this. This is important. Never be afraid to tell the truth.'”

To see more on Wallace’s protest, head over to Facebook and check out the #CallUsByOurNames hashtag.