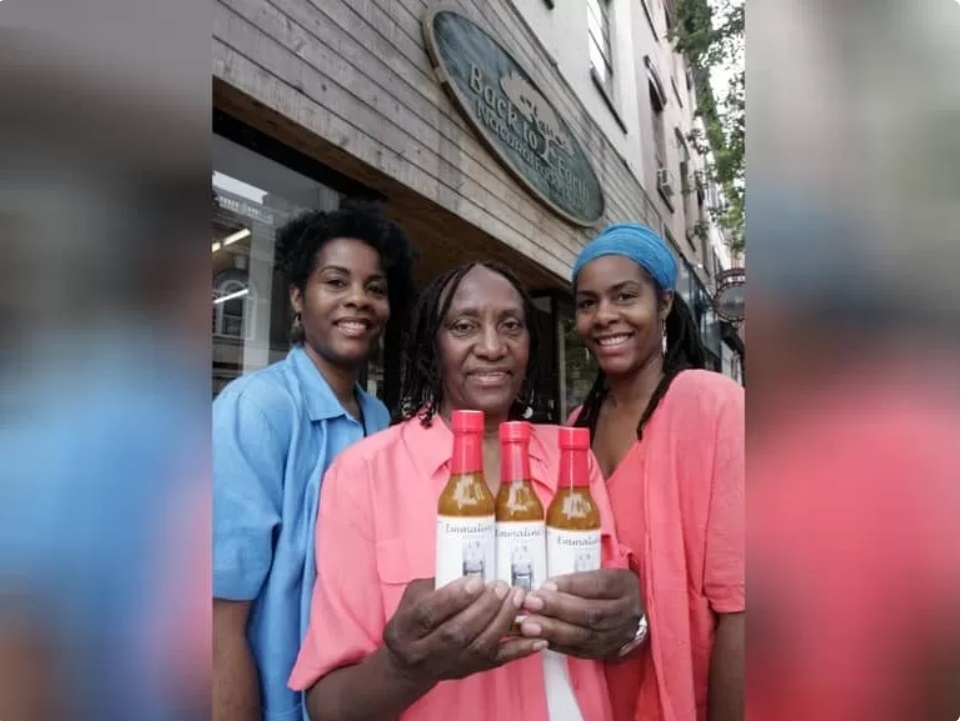 A family-owned hot sauce business is now back up and running after twin sisters worked to revive it.

Identical twin sisters, Alice Crowe-Bell and Alicia Crowe, are Howard University School of Law graduates who have practiced as attorneys for more than 20 years but decided to use their business acumen to help get a family business off the ground.

Emmaline’s All-Natural Hot Sauce is their grandmother’s recipe. They’ve teamed up to keep their family legacy alive. They have relaunched their family business in honor of their late grandmother, Emmaline Humphries Stinson.

The twins’ mother dreamed of selling the hot sauce, so they helped their mother sell it at various farmer markets and food tastings throughout the tri-state area. It did not take long for the sauce to develop a loyal following and by  2007 Emmaline’s Hot Sauce won the Whole Foods Local Hero Award.

Emmaline passed away last year, and the twins decided to honor their mother’s dream and continue their grandmother’s legacy by relaunching the hot sauce.

Now, the hot sauce has Emmaline’s 1910 wedding photo featured on the front of the bottle.

“The minute we reached out to her customers, within minutes, they were ordering the sauce, some by the case. They were so happy to know that we were moving forward with the sauce. That kind of response, it wasn’t because of me or my sister, it was because of my mother. She was so passionate and made her food with love,” Crowe said.

The sisters said they relaunched Emmaline’s Hot Sauce on Juneteenth and have received praise from customers for doing so.

Emmaline’s Hot Sauce is a four-generation-old recipe passed down from Alice and Alicia’s grandmother to their mother, Gwendolyn Stinson Crowe and now to them.

“My grandmother had 12 kids and kept a garden. She used to string peppers in the kitchen. My mother told us stories of how Emmaline seasoned and bottled her peppers. My relatives used to sit around the table, eating peppers until their noses sweat to see who could last the longest. That was something to watch. Some would be out in the first round,” Crowe-Bell reflected.

At Emmaline’s All Natural Hot Sauce we aim to bring you incredible joy, heat with flavor, and an amazing artisanal hot sauce made with simple homespun goodness. Our sauces bond friends, family, and loved ones. Bring a bottle to your next meal. We donate a portion of proceeds to charity.

“If you love good home-style cooking, then you know you’ve got to have this sauce. We make our hot sauce the traditional way with fresh peppers, herbs, spices and simple homespun goodness, just like our grandmother, Emmaline. A thick, rich, smooth well-seasoned peppery flavor that leaves just enough kick on your tongue to spark you joy.” Crowe said.

Emmaline ran a successful catering business in Dothan, Alabama. She learned the trade from Pauline Stinson. Pauline owned a restaurant on Claxton Street in Elba, Alabama. The restaurant served the Elba County jail, jurors, visitors to Courthouse Square, and Elba’s “colored” residents at the Emancipation Day Celebrations on May 28, 1907, and 1923. When the Pea River flooded and engulfed Elba, Ms. Emma cooked food to help flood victims.

Emmaline’s Specialty, Inc. donates a portion of all sales to charity. One charity they support is the Black Land Trust. Because their great-grandmother, Pauline Stinson, once owned 100 acres of land in Elba, by 1900. A period when formerly enslaved people amassed 14 million acres of land. Like so many other Black families in America, after the turn of the century, 90% of that land was lost and wrangled away from Black ownership to white ownership, thus creating the wealth gap that exists today.

The Stinson House, a property owned by Pauline & Martin Stinson, was recently designated an Alabama Historic Landmark. The African American family owned the home for 102 years. It currently houses the Elba Alabama Chamber of Commerce. According to the Elba Fire Department, the Stinson House was recently destroyed by fire just before midnight on July 12, 2021.