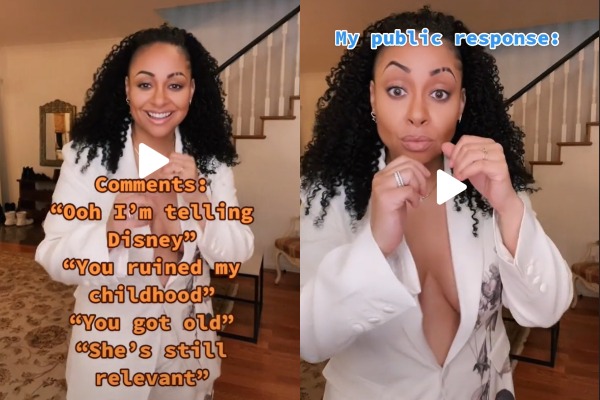 Actress Raven Symoné has become a trending topic after showing off her 40-pound weight loss in a comical, and subtly sexy TikTok video.

The former child star posted a short video clip Tuesday responding to some of the comments left by haters and critics. But, it was her choice of attire that got everyone talking.

“Ooh I’m telling Disney, You ruined my childhood, You got old, She’s still relevant,” Raven wrote over the video.

The That’s So Raven star spelled out her typical “public response” to stay silent before punching at the camera to share what she’s really thinking in her head.

“36 years in the game and people can’t handle the truth that imma do what makes me happy,” Raven wrote. “Wifed up, stacked up, and minding my own DAMN business.”

Raven sported a white pantsuit with a floral print emblazoned on the front. Her choice of shirt…none. The former The View host went topless under the blazer to show off her cleavage and toned torso.

The post garnered praise across social media with many giving The Cosby Show actress the flowers she deserves.

“The icon that is Raven Symone,” one fan tweeted.

The icon that is Raven Symone pic.twitter.com/URbafEtxzm

“Raven Symone said stop playing with her she been fine,” added someone else.

Raven Symone said stop playing with her she been fine

One fan pondered “why” she felt so “attracted to Raven Symone.”

On Tuesday, Raven attended a Pride event at West Hollywood hotspot Poppy, where she debuted her 40- pound weight loss transformation in the same plunging white pantsuit from her TikTok video.

Her toned appearance comes after Raven told The View in March she shed her former 210 pound weight by quitting sugar and fasting without working out, Daily Mail reported.

Now that Raven is happy with her results, she’s letting the girls say “hi” for Pride Month.