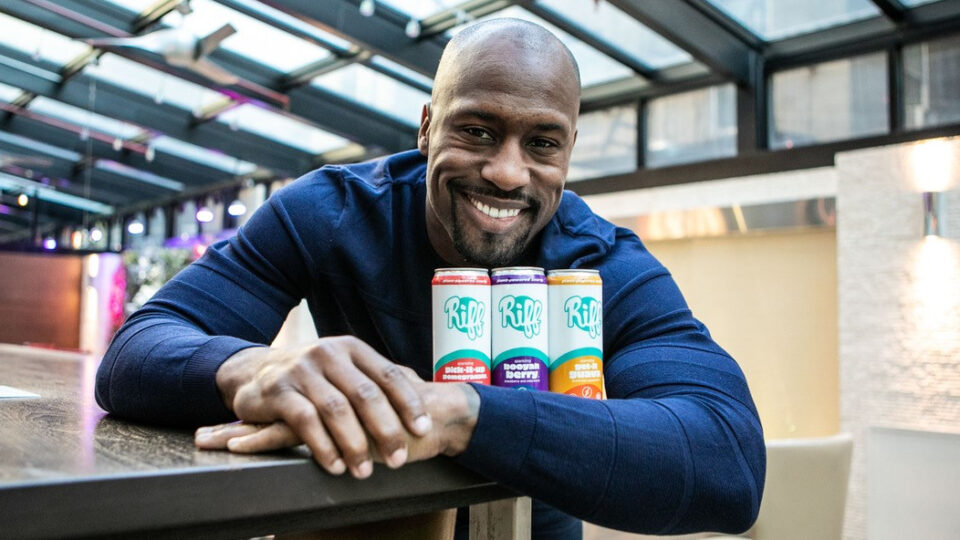 Going from success in pro sports to excelling in another field can be difficult for many athletes. That’s not the case for former NFL player Vernon Davis, who spent 14 seasons with three teams in the pros..

The Super Bowl champion and two-time Pro Bowler is now running his business interest while acting in television and films. Davis, who started a nonprofit to help kids more than 10 years ago, spoke with BLACK ENTERPRISE about his efforts as an entrepreneur, actor, and philanthropist.

Coming from a sports background, you’ve entered new fields such as the arts (acting and producing), entrepreneurship (Jamba Juice, Next Play Capital, RIFF), and philanthropy (Vernon Davis Foundation). Going from working out and game action, how was the transition been off the field and why did you choose to get involved in some of the things you have been doing since you retired from the NFL?

I was a studio art major in college and have always been interested in the arts in general. When I played for the San Francisco 49ers, I began taking acting classes, but with the commitment of filming movies and television, I did some smaller projects while I finished my football career. Once I retired, the transition from football to the performing arts was seamless. In football, there are many elements of preparation that are required during the week prior to a game. It has played a big role in how I prepare myself for movies and television. Instead of spending hours looking at film, I have now transitioned into memorizing lines.

I started my foundation, the Vernon Davis Foundation, back in 2011 to promote art education and appreciation among the youth. Today, the foundation takes a holistic approach, focusing on the overall health, education, and well-being of children from disadvantaged backgrounds. By providing essential resources such as scholarships, grants, learning materials, meals, and clothes, we strive to service and inspire our young leaders of tomorrow.

You’ve done a number of projects as an actor. In fact, you’ve just wrapped a movie where you play a serial killer. How does preparing for a role differ from preparing for a game? What is it that you have to tap into in order to have the energy to place into playing a role?

Preparing to be a serial killer can be really challenging. It’s where you must reach deep down inside and find the darkest moments in your life or moments that really affected you, something that you held onto for a long time. It’s about getting your power back. When your life was upside down and somebody did something to you or to a relative in your family. You just use that momentum and that energy and put it into your work.

As human beings, we all have that side to us that’s not who we really are. We have that side of the angry, evil side to us. But, we have it under control, because we know in life, we must be good citizens and we must be good people. Our hearts harbor a lot of the wrong things and evil things, but we channel them by being positive and having positive people in our lives, so we must connect with those moments in life, those dark moments. Something happened to a relative or to you and now you want to get payback. You want to pay someone back by doing something to them or harming them. We have all thought like that because are all human beings, so you want to use all of that energy in your work when it comes to being a serial killer.

Let’s talk about Vernon Davis the businessman. When you invest and/or start a company, what factors into your decisions as far as where that money and time go? What type of companies interest you?

First and foremost, the companies that interest me the most are those with purpose-driven business models.

I own multiple Jamba Juice franchises. I’m also the co-owner of Q-Collar Innovations, a developer of innovative products intended to reduce traumatic brain injury, [and] the co-owner and marketing advisor for Pescavor Jerky, a sustainable seafood jerky company. In addition, I’m partnered with PathWater, a new concept in bottled water that was created as a solution to help end single-use plastic pollution, as well as RIFF, an Oregon-based cold-brewed coffee company.

As for what factors into my investment decisions. I look at the people first. I look at the people in the company. I see who I’m dealing with. It’s one thing to get on Zoom and communicate with someone, but I need to spend time with this person, just meet them, just have a meeting in person, kind of see what they’re about…and then I just ride the wave, and because I have the platform that I have, I’ve been able to leverage my deal by incorporating an endorsement component where they give me more equity for my name and likeness to help them grow the company and grow their brand.

As an entrepreneur, what is your end goal? What do you anticipate for your businesses in the near and distant future?

My end goal is to make an impact on those who find a benefit from my service or product in that they find my company helpful and a necessity for their everyday life.

When it comes to doing business, what would you tell anyone who wanted to speak to you about starting one and keeping it afloat?

I’m one of those guys who wholeheartedly believes in the unexpected. And I believe in going with the flow. If there’s something you want to do, but you’re not quite sure–go with the momentum. It’ll drive you to where you ultimately need to be.