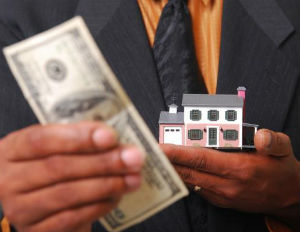 The bad news, however, is also that 15.4% of U.S. mortgage holders have negative equity.Â  Even though the number is shrinking, it means nearly 8 million people find themselves in this situation. Add to that the The Haas Institute for a Fair and Inclusive Society at UC Berkeley’s finding that African Americans are a large part of the population in the hardest hit cities, and you begin to understand why so many in the Black community feel like the economic recovery is passing them by.

“Unfortunately, the urgency has passed. Too many people think the housing crisis is over,â€ says Gerri Detweiler, Director of Consumer Education at Credit.com. “Because there isn’t as much urgency, there doesn’t appear to be an urgency to come up with solutions,â€ she adds.

Detweiler is referring to loan modification programs that were implemented during the housing crisis that allowed creditors to forgive mortgage debt that was deemed to be the result of unscrupulous lending practices, like predatory lending. “Not a lot of new programs are coming out,â€ she says.

If This Happens To You

If you’re in a negative equity situation the first thing you need to do is to understand your mortgage and your options. She recommends speaking to a counselor or bankruptcy attorney.

“Counseling is definitely the first step. Many people don’t understand the implications of just giving up on their mortgage. There can be unexpected taxes, garnishment of wages, and seizure of bank accounts.Â  For some people, it makes sense to just stay put until home values rise, but they should talk to someone. You want to know what’s going to happen before it happens.â€ says Detweiler.

Even people who had their mortgages modified need to be informed consumers because some of the terms may be expiring. “Consumers who got their mortgage modified through HAMP programs are starting to see their payments increase as modification terms wear off. These programs were meant to be quick fixes. In addition, a lot of homeowners who got second mortgages at the height of the market, are getting to the point where the interest only part is starting to end. Many of the interest only options only lasted for 10 years. They will see payments go up, and if they’re underwater, they can’t sell or refinance to get out of second mortgage,â€ she adds.

This week, the U.S. Department of Housing and Urban Development, (HUD), announced $6 million in new grants, to help hundreds of national, regional, and local organizations give free counseling to help families and individuals about housing.Â  Go to Hud.gov for more information.