Will the â€˜Pay Gapâ€™ Between Serena Williams and Maria Sharapova Close? 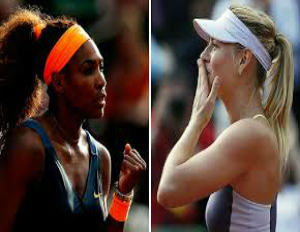 It didn’t take long for advertisers to abandon advertising’s once gold standard for female athletes, Maria Sharapova. The Russian tennis star, one of the highest paid female athletes in the world, earning more than twice the endorsement money earned by Serena Williams, told reporters today that she tested positive for the drug meldonium in January.

Sharapova says she’s been taking the drug for a decade due to health concerns, and did not realize it was banned by the World Anti-Doping Agency at the start of 2016.

[Related: Sachia Vickery, Playing it Safe With Her Money, Playing to Win on the Tennis Court]

“We are saddened and surprised by the news about Maria Sharapova,” Nike said in a statement. “We have decided to suspend our relationship with Maria while the investigation continues.”

Swiss watch brand TAG Heuer said it was suspending negotiations with the tennis player about renewing a sponsorship deal that ended in December. Danone, which owns Evian, said it was surprised by the news and would follow the investigation closely.

“The recent admission has already affected her brand ambassador and licensing dollars,â€ says Martin Morse, CEO of the MM Group, which provides financial and business mentoring to elite athletes and high-profile celebrities.

“As more information comes out regarding the exact substance and if there is additional PED’s or other drug use we’ll see further distancing I predict. Corporations now are hyper sensitive to their ambassadorship representatives. The digital age has brought those brands closer to the consumer now more than ever,â€ he adds.

While Williams has always stood in Sharapova’s shadow when it comes to endorsements, she has always been supportive of her Russian rival, saying in a New York Time Magazine story last Summer, “If they want to market someone who is white and blond, that’s their choice…I’m happy for her…There is enough at the table for everyone,” and saying Sharapova showed “a lot of courageâ€ accepting responsibility for her failed drug tests after today’s announcement.

“From a money standpoint, she’s worth at least three times more from an advertising standpoint [than] what she’s getting,â€ says Morse. “As far as Serena now being able to close the licensing gap with Sharapova, however, I don’t see any change happening there at all. The same reason there is a gap in the first place will not change as a result of the recent Sharapova news. If Nike wanted to close the $30 million contract difference, they would have years ago,â€ he adds.

If history is any guide, Williams like other women trailblazers in sporting and other arenas, will have to shatter her own glass ceiling, and demand the pay that her brand and record warrant.