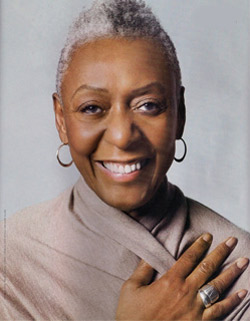 Hardison is a true Woman of Power (Source: Press)

Having paved the way for the Tyras and the Naomi Campbells of the fashion industry, Bethann Hardison was one of the first Black models for giants like Calvin Klein, Oscar de La Renta and Perry Ellis in the 1960s. She’s also guided the careers of supermodels like Tyson Beckford through her pioneering modeling agency, Bethann Management. Today, the New York native (and mother of actor Kadeem Hardison) is still breaking ground as the first Black editor-at-large for Vogue Italia online.

According to Hardison, who is also working on a documentary called Invisible Beauty, the key to her success has been learning to harnesses her personal power by going within. “I’ve always been a non-conformist,â€ says the legendary businesswoman, who avoids social networking tools like Facebook and Twitter. “I like to be alone with my own thoughts. [Social networking] is a distraction of self. [To be powerful] you have to detach from all the noise. Being quiet also allows you to tap into your spiritual self.â€

Hardison says only when you know who you are will you be able to find the courage to do what drives you–with integrity and grace. “I founded my modeling agency at a time when no one else Black was doing it,â€ recalls the style icon. “I had to compete with my White counterparts. As a Black girl coming from Bedford-Stuyvesant [in Brooklyn, NY], I knew if anyone ever said I owed them [money], it’d be a wrap. But I learned early on that personality and character can take you a long way. When I closed the door to my agency in [1996] I owed no one. I am very proud of that.â€

Hardison is one of several Legacy Award recipients at theÂ 2011 Black Enterprise’s Women of Power Summit, taking place Feb. 23-26 at the Ritz Carlton in Orlando, Florida.

Want to join us? As an incentive, Black Enterprise is offering you $200 off registration. Just enter code WEB995 at BlackEnterprise.com/WPS. Offer ends Feb. 18, 2011. Still worried about the fee?Â Ask your company to sponsor you by submitting a sponsorship letter (click here for an example). See you there!

Check out these related Women of Power articles…

FacebookTwitterYoutube
← How To Build Your Ultimate Small Biz Support Network ← Love & Money: How to Bring up a Prenup
×