On the Job: Should HIV Status Be an Office Secret? 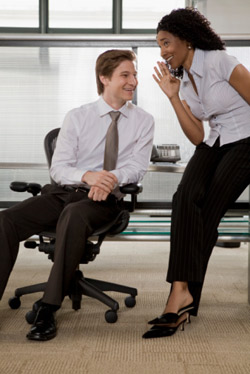 Tracy Mack thought his secret was safe with his former boss. In 2006, Mack was working as an alcohol and substance abuse counselor at a New York health services organization and told his supervisor that he was HIV-positive in case complications forced him to miss workdays. None of his coworkers knew his status until his boss let the information slip to a colleague after Mack was hospitalized with pneumonia.

“When he told another colleague he was going to see me in the hospital, the coworker said, ‘Oh, what’s wrong with him?’ He went on to say it’s not due to my HIV,â€ recalls Mack, 47, who has been HIV-positive since October 1990. “The director, who was a friend of mine, shared my status to another friend who was my colleague but with whom I never shared my status.â€

From that moment on, Mack says he never experienced overt discrimination at his workplace, but worried about how he might be perceived there. “I was always concerned about who he may have accidentally or deliberately told so I would walk around not knowing who knew,â€ explains Mack, who received an apology from his manager. “Should I tell everybody? That was really traumatic.â€

Though Mack never filed a complaint with his human resources department, many others in similar situations file grievances. In fiscal year 2010, the Equal Employment Opportunity Commission reported 25,165 disability discrimination charges, an increase of nearly 4,000 from the previous year.

Employees who have recurring health issues and/or serious illnesses, such as cancer and HIV/AIDS, should be aware of their rights, says Susie Tomlin, a 16-year HR veteran based in Orlando, Fla. There are many laws in place to protect such employees against discrimination, including the Health Insurance Portability and Accountability Act (HIPAA), Americans with Disabilities Act (ADA), and the Family Medical Leave Act (FMLA). The bottom line, though, is clear. “Medical issues do not have to be communicated to employers,â€ Tomlin says. An exception is in regards to a hospital job. “You can’t have a communicable disease,â€ she adds. “So in those settings you’re tested.â€

Wendy Payton, a HR professional since 1991 who now lives in Virginia, advises all employees to closely read and understand their company’s policy on medical leave and short- and long-term disability options. And if there’s a situation where you’ve been harassed by a supervisor or coworker, contact an HR officer or, where available, call your organization’s hotline to file an anonymous complaint. For workers who anticipate needing to take days off due to doctor’s appointments or other health-related absences, Payton suggests that they contact their HR office directly rather than an immediate supervisor. “We have to tell them what their rights are and what’s available before we can write them up or put them on corrective action or fire them,â€ she explains.

“The workplace has more and more regulations in place, which is good for the employee,â€ says Tomlin, who adds there’s less chance to lose a job due to a health issue now than in years past.

Still, Mack learned a valuable lesson. He offers simple advice to anyone who is HIV-positive in the workplace. “Don’t say anything [about your status] because that would eliminate or lessen anything [negative] that may occur,â€ he says. “Some folks still believe that if you share the toilet and if you shake someone’s hand or if someone cries on you, [you can transmit HIV]. It’s a horrible place to be. I felt the need to do…damage control almost.â€