Young, Black, and Looking for a Job? Create One 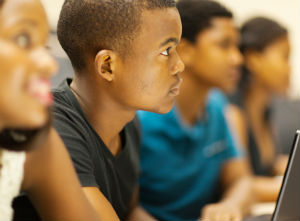 Now is the time to reject the myth of the skills gap, and reorient black teens to a new way of thinking about employment.

Young, black, and looking for a job? Create one.

According to a report from theÂ Employment Policies Institute, 31.2% of black teens are unemployed. This rate of unemployment is six times higher than the national average. The skills gap, defined here as an absence of qualified black graduates in high demand fields such as engineering and computer science, is the most popular myth used to rationalize these disparities. However,Â Dr. Darrick Hamilton, Professor of economics and urban policy at the New School, says, “If you look at the empirical evidence, that is just not the case.â€

The high rate of black teen unemployment is indicative of far more than a skills gap. Major technology companies, for example, have consistently cited a severe shortage of qualified black and Latino job applicants to explain the dearth of workforce diversity.

If skills alone aren’t the solution to the black teen unemployment crisis, then what is?

According to Claud Anderson, Founder of Harvest Institute, “Empowering black children is more than teaching them math and reading skills. They must know how to compete for wealth and power–rather than poverty and acceptance–to produce rather than consume and to be job producers rather than job seekers.â€

Teaching black teens how to create products and offer services that meet the marketplace needs of the black community is one way of creating jobs, building wealth, and tapping into the $1.1 trillion in African American buying power.

Tristan Walker–a young, black, Stanford graduate–has generated $24,000,000 in venture capital investments for a high-end shaving kit for black men “with coarse hair.â€ As a black man who struggled with razor bumps, acne, and irritated skin, he shared this struggle with other men of color who could not find products that were tailored to their needs.

“It’s not only my problem,â€ Tristan stated about his business Bevel and Company, “but a lot of folks who look like me (who also) have the problem. It’s something endemic to black culture, which is unfortunate.â€

Solving this problem enabled him to benefit from the buying power of African Americans, which is projected to reach $1.1 trillion, according to the Nielsen reportÂ African American Consumers: Still Vital, Still Growing.Â It also helped validate his decision to leave a high-paying job in the technology field to pursue entrepreneurship.

Tristan has achieved tremendous success by creating a profitable business which sells products that African Americans prefer to buy. Not only has he received validation from consumers that it’s valuable, but also from corporations who want to buy his company.