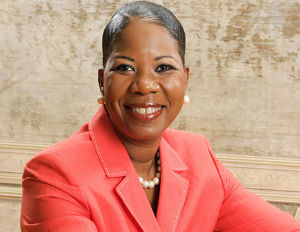 “I really like a quote and lesson that is often used by Suze Orman: ‘People first, then money, then things,’ says Dr. Dara Richardson-Heron, CEO of the YWCA USA.

Richardson-Heron shared her reflections and observations about wealth with BE.com asÂ part ofÂ our ongoing series, The 3 Most Important Lessons I’ve Learned About Money.

It is clear that the leader of one of the world’s most influential organizations aimed at empowering women and eliminating racism has been impacted by the face to face encounters with people who have been on the losing side of income inequality in the United States.

BlackEnterprise.com: What are the 3 most important lessons you’ve learned about money?

Richardson-Heron: First, I’ve learned that income inequality is very real, and it will take more than individual hard work to correct it. The gender and racial wage gap is crushing women and communities of color. A woman, on average, makes 78 cents for every dollar that a man makes. But, unfortunately, that number is much lower if you’re a woman of color. Black women make only 64 cents and Latinas only 54 cents for every dollar a man earns…

Second, I’ve learned that low-income women, who make up the majority of participants in YWCA programs, are incredibly resourceful and can benefit greatly from financial leadership and budgeting classes…This vitally important knowledge and education not only increases the income for women and their families, but also goes a long way toward breaking the cycle of poverty.

Third, I’ve learned how critical economic stability is for survivors of domestic violence. As I have spoken about with Black Enterprise in the past, financial insecurity is the most common barrier for women who want to leave an abusive partner.

How did you learn these lessons?

I have had an incredible support system in my life and have made great strides both as a physician and as nonprofit leader, but I am not a stranger to the discrimination that still exists for women of color in our country. We cannot underestimate the role that bias plays in our personal and professional lives. I will never forget the uncomfortable interaction I had with a supervisor who criticized me for having a style that was “too professionalâ€ — feedback I cannot imagine he would ever deliver to a white man.

If you had one lessonÂ to convey to people about money, what would it be?

In our society, money is the currency that affords each of us with access to the American Dream that we all hold so dear. So the first thing I would like to convey to people about money is how imperative it is to make sure that our institutions, systems, and laws provide an equitable opportunity for everyone to earn a salary that enables them to take care of themselves and their families.