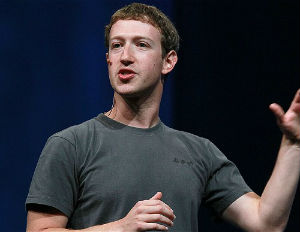 [Related: HOW SOCIAL MEDIA TOOLS CAN MAKE YOU A SMARTER INVESTOR]

-Â Â  Instead of building walls we can help build bridges.

In what was widely-regarded as a shot at Trump’s call for building a wall to keep out immigrants, Mark Zuckerberg opened his keynote at F8 by saying, “I hear fearful voices calling for building walls and distancing people they label as ‘others’…it takes courage to choose hope over fear.â€

-Â Â Â  Facebook Messenger will change the way you deal with businesses.

Zuckerberg said that with Facebook’s new Messenger platform, the way in which people communicate with businesses will be as if they are messaging a friend. There will be no additional app to install. He showed an example of someone using Messenger to send 1-800-FLOWERS flowers without leaving Facebook. Businesses will use Messenger’s API to build “botsâ€ that will interact with customers.

The roll-out of Facebook Live ushers in a new era for online video, said the Facebook founder. Facebook announced it will open its Live app up to developers to incorporate into their apps.

Zuckerberg said that there are still 4 billion people without Internet and he plans to change that. Facebook built a solar-powered plane which can stay in the air for months and “beam down Internetâ€ to remote places on the planet. Facebook is also launching a satellite to deliver connectivity to sub-Saharan Africa. It’s also creating frameworks for building apps that use less data to make data plans more affordable.

With Artificial Intelligence, Zuckerberg said that Facebook is focused on building systems that have better perception than humans. In a few years’ Facebook will understand what is in the photos, videos and articles posted on its platform. This will deliver better content to users. Also, with AI, the company developed a tool that lets the visually-impaired “seeâ€ photos. The tool reads what’s in images aloud.

With the acquisition of Oculus, Virtual Reality and Augmented Reality have been a big focus of Zuckerberg’s. The company is releasing touch controllers for the Oculus Rift which will allow people to interact with one another in a VR and do things such as pick up objects. He said within 10 years, the bulky headsets will be reduced to a pair of normal-looking glasses.