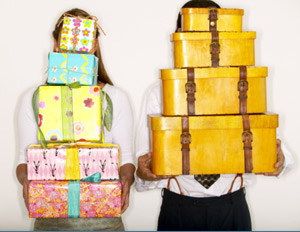 Before the last of the Thanksgiving leftovers have even been gobbled up, the big announcement came that retailers just enjoyed their “biggest Black Friday ever!â€ Rather than hit the gym to work off those yummy candied yams and pies (pecan, apple, sweet potato… Oh, my!), Americans raced to…. the malls! Or, they just sat back at home, scratched their full bellies, and chugged antacids as they shopped online, getting their Cyber Monday fix on early. The final tally? More than $50 billion in total sales for the “holidayâ€ weekend, up from $45 billion last year!

Major network news correspondents, otherwise credible financial analysts, and so-called money-honeys of all genders, sizes and hues, treated this bit of shopping trivia like it was a great big Christmas present! Despite still outsized unemployment, foreclosure, homelessness, and national debt statistics, legitimate journalists actually posed the question: “Does this mean our economy is finally turning around?â€

After all, isn’t that exactly what we were urged to do by none other than then-president George W. Bush in the immediate aftermath of 9/11? He didn’t suggest that we batten down our financial hatches in preparation for the colossal war bill we’d be facing, or that we collect goods from our already overflowing closets and cupboards to help sustain those with less in our communities, or to send to troops and their families. No. He said, go out and shop!

Then, we kept on doing it. For the last decade, we have spent money and racked up debt at record levels–and why wouldn’t we when at every turn, when the economy has stalled, disaster has loomed, and the so-called great financial minds of the world are thoroughly stumped, they say the same thing: Go shopping.