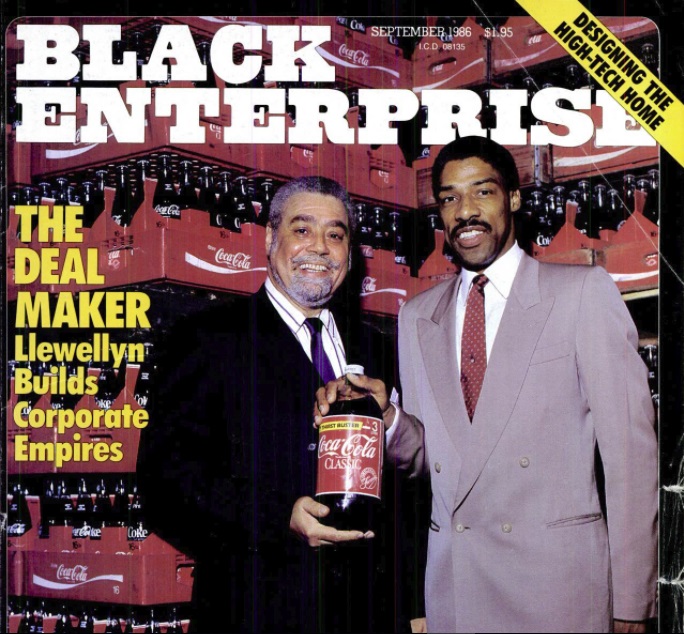 Today we reveal No. 19 in the web series “Great Moments in Black Business.”

Aware that blacks and Latinos were heavy-duty consumers of soda pop, the late J. Bruce Llewellyn for many years dreamed of owning a bottling company.

The business tycoon who built his first BE 100s company with the Bronx, New York-based Fedco Foods Corp. supermarket chain—the third-largest black business when BLACK ENTERPRISE unveiled the original Top 100 list in 1973—had unsuccessfully tried to purchase a Connecticut Pepsi-Cola bottling plant but the deal collapsed just before the closing. Llewellyn was not deterred in reaching his goal, however. He turned to its rival Coca-Cola, the company he first approached about a transaction.

Working within Coke, Llewellyn masterminded a deal in 1985 that allowed him and Erving to part with their interest in New York Coke and gain majority ownership of Philadelphia Coca-Coca, one of the nation’s largest bottling plants. The pact made it the first black-owned soft drink bottling franchise. The deal came four years after Rev. Jesse Jackson’s Operation Push led a boycott of Coke products. As part of the settlement, Coca-Cola Co. agreed to make business participation with African Americans the real thing.

Although the acquisition price had not been revealed, the company’s value was estimated at $100 million. Under Llewellyn’s watch, the Philadelphia Coca-Cola franchise rose to become the sixth-largest Coke bottling operation and the nation’s third-largest African American-owned business. The significance of the deal was multifold. For one, it gave African Americans an entrée to compete in the general market. It also demonstrated that black athletes could score big in business long after the cheering stopped. Long before Magic Johnson, Michael Jordan, and LeBron James made their commercial forays, Dr. J set the entrepreneurial standard with Philly Coke and other ventures.

Llewellyn also thrived in the banking, broadcasting, and supermarket industries, becoming one of the few CEOs to control multiple BE 100s companies. This uncanny dealmaker and prolific empire builder was also one of America’s richest African Americans, compiling an estimated net worth of $160 million. He passed at age 82 in 2010.

The son of Jamaican immigrants, Llewellyn was born in Harlem. His family moved to an integrated neighborhood in White Plains, New York. Early on, he learned the value of money, the benefits derived from hard work, and the art of crafting a lucrative deal. He served in the U.S. Army where he became a commander and earned a J.D. from New York Law School. He worked for four years in the New York City District Attorney’s Office and as deputy commissioner of the city’s Housing Commission. He eventually left the public government sector for entrepreneurial pursuits.

Assisted by an investment banking firm L.F. Rothchild, Unterberg, Towbin and Prudential Insurance Co. in a transaction that was considered “really one of the first leveraged buyouts that was ever done, before they became popular” Llewellyn raised $3 million in 1969 to acquire Fedco Foods Corp, a grocer with 10 stores in the South Bronx. He nearly tripled Fedco’s store count by 1983. In its heyday, Fedco’s sales reached $2 million per week. Llewellyn sold Fedco for an estimated $20 million in 1984, a year after buying into New York Coke. Being in the grocery business, Llewellyn watched soft-drink sales grow and learned that fizzy beverage was a huge hit in urban communities.

The late baseball legend -turned-businessman Jackie Robinson, chairman of  Freedom National Bank in Harlem, asked his friend Llewellyn in 1971 to join the bank’s board. The bank was $1.9 million in debt and headed toward bankruptcy. Llewellyn succeeded Robinson in 1973, helping the bank recover partly by collecting capital from white-controlled financial firms. During the next two decades, the institution would be among the leaders on the BE BANKS List until it collapsed in 1990 under different leadership. In the late 1970s, Llewellyn was selected by President Jimmy Carter to head the Overseas Private Investment Corp. (OPIC) in which he negotiated with heads of states, finance ministers, and U.S. businesses; providing $65 million in financing for projects and issuing more than $1 billion in risk insurance to corporations.

The Leap to Cable TV

An entrepreneur steadily looking for new ventures, Llewellyn used a portion of the profits from the Fedco sale to buy an ABC-TV affiliate in Buffalo, New York. Through Queen City Broadcasting, which was also a BE 100s company, Llewellyn invested in cable TV. In 1989 he bought a 20% share in South Jersey Cable (renamed Garden State Cable). The next five years he served as chair of one of the nation’s the largest cable systems.

In 2006, after  21 years in the bottling business, BLACK ENTERPRISE reported that Llewellyn’s firm, Brucephil Inc., owner of the Philadelphia Coca-Cola Bottling Co. signed a deal to sell its remaining shares to Coca-Cola. The soft-drink giant owned 31% of Philly Coke at the time. The deal came after Llewellyn boosted the sales of Philly Coke—No. 5 on the BE INDUSTRIAL/SERVICE COMPANIES list—from $300 million to $540 million.

Llewellyn broke barriers with the Philadelphia Coke deal. Yet, that purchase and others large transactions he structured can be sized up with one of his famous quotes: “Minorities will have to understand that the world revolves around the golden rule—’Those who have the gold, rules.’” Through his transformative deals in which he included other black entrepreneurs, Llewellyn made sure that multitudes of African Americans received that message loud and clear.