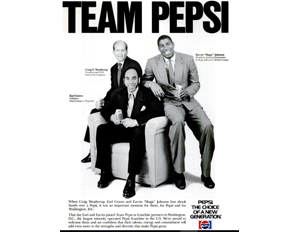 For the 45th Anniversary of the BE 100s—the nation’s largest black-owned businesses—we share 45 milestone events that have had widespread impact on black economic development and American industry across four decades. This tribute salutes the iconic companies and CEOs found on BE‘s annual list of the largest black-owned companies.

Today we reveal No. 30 in the web series “Great Moments in Black Business.”

It was an all-star joint venture between the founder and publisher of the nation’s pre-eminent black business publication; an NBA superstar with entrepreneurial aspirations; and one of the world’s largest beverage giants. When BLACK ENTERPRISE‘s Earl G. Graves Sr. and Magic Johnson completed the $60 million transaction to own a Pepsi franchise in July 1990, their achievement became the deal-making choice of a new generation; growth through partnership and acquisition. For good reason: Graves and Johnson’s milestone added some new fizz to the BE 100s as the new entity, Pepsi-Cola of Washington, DC L.P., ranked No. 19 with $44 million in revenues upon its debut on the BE INDUSTRIAL/SERVICE 100 in June 1992. (To make the BE 100s rankings, a new company with at least 51% black ownership must be in operation for a full calendar year.)

As you would expect, BE had the inside scoop on the evolution of this sweet deal. Here’s the edited October 1990 account as reported by writer Fred Martin:

For Earl G. Graves, Sr. the road to acquiring a soft drink franchise began not in a plush corner office but 35,000 feet in the air.

In January 1988, the 53-year-old Graves was traveling by plane en route to a speaking engagement when he struck up a conversation with his seatmate, a senior-level Pepsi-Cola executive, After both men exchanged routine pleasantries, Graves showed him a copy of BE. After familiarizing himself with the magazine, the soft drink manager told Graves that Pepsi had been looking to do business with a prominent black businessman. Two years later, Craig E. Weatherup, then-president and CEO of Pepsi-Cola Co.—not the executive on the plane—announced creation of the largest-minority-controlled Pepsi-Cola franchise in the country.

In a move exemplifying the growth of African American business at the time, Graves and Earvin “Magic” Johnson, the Los Angeles Lakers veteran, officially entered the $40 billion soft drink business by teaming up to purchase Pepsi-Cola of Washington D.C., a Forestville, Maryland sales distribution facility serving the District of Columbia and a small area of Prince Georges County, Maryland. The $60 million deal marked only the second time in 20 years that Pepsi had brought new ownership to its franchise network. At the time, the only other black-owned Pepsi franchise was a Houghton, Michigan-based enterprise owned by Dr. William Harvey, president of Hampton University.

“This is a unique venture,” said Weatherup, “one that we’ve been discussing and evaluating over two years. Earl and Earvin bring more to it than just their knowledge and their expertise. They bring their experience. Their stature and the unique position they occupy as role models for the black community.”

Graves and Johnson, CEO and executive vice president, respectively, were responsible for the new company’s operations, strategic planning and general management. Pepsi-Cola was a limited partner in the venture. Graves remained BE‘s publisher while he spent a significant amount of time in the Washington metro running his franchise. In terms of the partnership, Graves owned more than 65% while Johnson held more than a 30% stake and both had the right of first refusal for other purchases. Pepsi remained a limited partner and its equity stake could change, opening up possibility for a greater share of the operation for Graves and Johnson.

The plant, which sat on a 6.1-acre plot, had about 160 employees, its own sales staff and a fleet of trucks. It distributed soft drink brands such as Pepsi, Diet Pepsi, Mountain Dew, Mandarin Orange Slice and Mug Root. Key accounts included the White House, the U.S. Capitol and Air Force One.

The idea of buying a franchise was nothing new to Graves. For several years he investigated several potential candidates and chose the Pepsi franchise, which sold 4.3 million cans of soda annually, because the company had market presence, solid leadership and spent $325 million with minority vendors between 1982 and 1992.

Sealing the deal was not easy. The “tough but fair” negotiations, which began in 1988, continued right up until the announcement in July 1992. During the lengthy talks, the principals got to know each other well. “When I would receive telephone calls at 6:30 a.m. on Sundays,” recalls Weatherup. “My wife would say, ‘It must be Earl.’

Finding the right partner is also key to any successful joint venture. Graves knew he had his man in Magic Johnson, the 30-year-old three-time NBA Most Valuable Player. Johnson was a man with resources of his own and a stellar reputation o—and off—the court. Johnson’s association with the Pepsi trademark was a major plus since he had great appeal in black and white communities.

Graves and Johnson met in 1988 at New York City’s 21 Club to talk business. “I was looking for someone who was mature and committed to making this business venture a success,” Graves said. The two hit it off and shook hands on the deal. Two years later the franchise deal was done. For Johnson, he was eager to work with the publisher: “This is an opportunity to learn some business magic from Earl Graves.”

Pepsi-Cola of Washington, DC was BE 100s leader for several years until Pepsi-Cola engaged in buybacks of its bottling operations. In 1999, Graves sold a majority stake in the franchise. But he still maintained a strong relationship with the soft drink giant, which served as a title sponsor for the popular Black Enterprise/Pepsi Golf & Tennis Challenge—an event that brought African American movers and shakers together for recreation and power networking—over two decades. Graves held a prominent position on the company’s minority business advisory board and served as general partner of Egoli Beverages L. P., a short-lived Pepsi-Cola franchise in South Africa.

As for Johnson, he often cites Graves as one of his mentors. Since the franchise’s formation, his business career has been effervescent. Through partnerships with powerful brands such as AMC Theaters, Starbucks, TGI Friday’s and L.A. Dodgers, the prolific entrepreneur he has built a diversified commercial empire over the past 25 years. These successful ventures, in turn, have made Johnson an MVP in business.