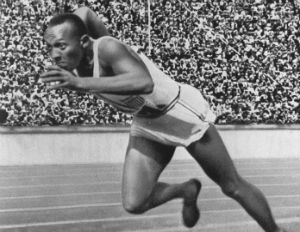 Adidas has announced a new Black History Month footwear collection inspired by Jesse Owens. Owens, one of the most well known African American track and field athletes in history, is considered a sports and cultural icon.

According to Adidas, “The Owens family is pleased to partner with Adidas for Black History Month with a commemorative basketball shoe. On the feet of athletes who compete in the spirit of Jesse’s historic accomplishments, these shoes encompass the significance of one of the greatest athletes the world has ever seen.”

Born in Alabama and raised in Ohio, Owens rose to fame at the 1935 Big Ten Championships in Ann Arbor, Michigan, where he broke three world records and tied a fourth. At the time, it was the greatest one-man, one-day performance the sport had ever witnessed.

The following year, at the 1936 Olympic summer games in Berlin, Owens became a symbol for social justice and equality. He became the first American track and field athlete to ever win four gold medals in a single Olympics. He accomplished this wearing hand-crafted Adidas footwear and his performance marked one of the most significant sports and cultural moments in sports history.

During the Martin Luther King Jr. Day games on Monday, Jan. 18, NBA players James Harden, Derrick Rose, and Damian Lillard will debut the exclusive new collection. Other players will continue to showcase the hot new kicks throughout the month of February.

The three designs all feature similar cream and brown tones, gold accents, and signature details, including Owens’ 733 bib number. You can view the entire collection here.