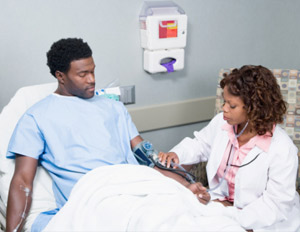 Two years ago, James Osborne, 39, walked into an emergency room with severe swelling in his ankles, calves and thighs. He started to put on weight several months prior to his hospital visit, but chalked it up to a lack of exercise and an unhealthy diet. “I’ve always been a big guy,â€ says the former college football player. “I knew I wasn’t hitting the gym or eating the best foods, so I thought I was just gaining weight.â€

The doctors gave Osborne a urinalysis and discovered that he had a whopping 59,000 milligrams of protein in his urine (the amount of protein in a random sample of urine is normally less than eight milligrams). He was admitted into the hospital on the spot and stayed for two weeks. He was later diagnosed with Membranous Nephropathy, a rare kidney disorder that leads to changes and inflammation of the structures inside the kidney that help filter wastes and fluids.

“I was walking around with 100 pounds of fluid and I didn’t realize it,â€ says Osborne, a sewer foreman from Woodbridge, NJ. “The doctor told me that was the highest amount of protein he’d ever seen in his medical career. He couldn’t believe that I was able to function and that my kidneys weren’t completely shot. But the scariest thing of all is that I didn’t realize how sick I was until I started feeling better.â€

“There does seem to be an association between two particular genes in African Americans that are associated in developing kidney disease,â€ says Dr. Bryan Becker, former president of the National Kidney Foundation. “MYH9 and another gene called APLO1 seem to be more prominent in African Americans than individuals who aren’t African American, so there is probably something related to that. Second, we know that access to healthcare and reducing healthcare disparity likely has a beneficial impact on chronic kidney disease. If African American men develop hypertension and don’t have as much access to healthcare services, they miss out on treatment for their blood pressure and screenings for kidney disease at the right time to identify it and get the right treatment to prevent it. Reducing healthcare disparities, which we need to do for everybody, would benefit the African American community by increasing the number of people who are screened.â€

Is Your Boss a Psychopath?

Triumphing Over Unemployment: How a Young Woman Made Her Boss Move

FacebookTwitterYoutube
← Is Your Boss a Psychopath? ← Triumphing Over Unemployment: How a Young Woman Made Her Boss Move
×
'