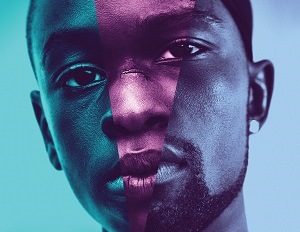 Moonlight, a coming-of-age drama about gay, African American men in Miami, has garnered eight Oscar nominations, including Best Adapted Screenplay and Best Picture. The critically acclaimed film stands a chance to become the first LGBTQ film to take the top prize at the Academy Awards.

Black and Gay in America

Moonlight chronicles the life and self-discovery of a young man growing up in a rough neighborhood in Miami. As he struggles between childhood and adulthood, he also grapples with his sexuality and sexual identity, in a culturally hyper-masculine social environment. Based on the semi-autobiographical play by Tarell Alvin McCraney, In Moonlight Black Boys Look Blue, the highly cinematic story told in three distinct acts, with three different actors playing the main character, is what earned Jenkins and McCraney the Best Adapted Screenplay nomination.

Moonlight received critical acclaim, and was among the big stories at the box office on its opening weekend. According to Box Office Mojo, Moonlight–released by the indie company A24, with executive producer Brad Pitt on the credits–scored an impressive $414,740 in just three days, with a $103,675 per-location average. To date, however, the film has a total domestic box office gross of $16 million.

Against the backdrop of a nationwide conversation about #OscarsSoWhite,Â  a black actor has been nominated in every acting category: “Best Actor, Best Actress, Best Supporting Actor, and Best Supporting Actress–in the same year, for the first time in Academy history,” reports Entertainment Tonight. Additionally, Ava DuVernay earned her first Oscar nomination for 13th, a documentary about the thirteenth amendment, after being snubbed for her work on Selma.

What’s more, for the first time, three films with black producers were nominated for Best Picture, including newcomer Kimberly Steward for Manchester by the Sea. In 2013, she formed K Period Media, a company that develops, finances, and produces film, television and digital projects. Steward is the daughter of David L. Steward, CEO and founder of World Wide Technology, which hold the No. 1 spot on the BE 100’s Industrial/Service list, with $7.5 billion in revenues for 2016.