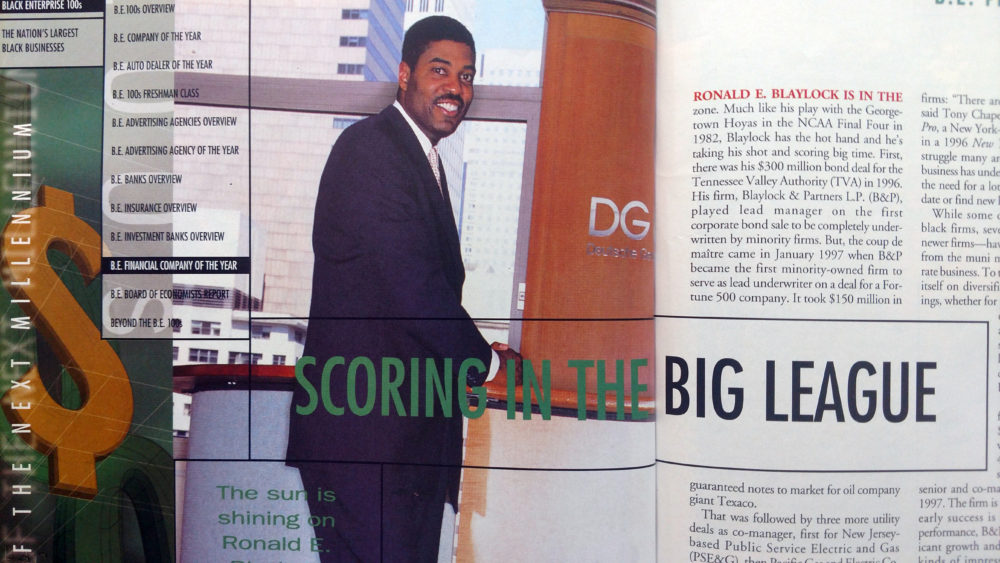 BLACK ENTERPRISE celebrates the 45th anniversary of its roster of the nation’s largest black-owned businesses—The BE 100s. To commemorate the significance of this collective’s widespread impact on black business and economic development as well as American industry over four decades, we have presented 45 milestone moments. As part of this tribute, we continue our yearlong countdown.

Today we reveal No.15  in the web series “Great Moments in Black Business.” In 2004: Blaylock & Partners, No. 2 on the BE investment banks list, is a co-manager of the $2.7 billion public offering of Google with 14.159 million shares of Class A common stock. Other underwriters include BE 100s firms M.R. Beal & Co. and Utendahl Capital on a transaction representing the first such significant engagement with a next-gen Silicon Valley company.

In a breakthrough deal, Blaylock & Partners was an underwriter involved with the $2.7 billion public offering of Google Inc. Blaylock & Partners served as a co-manager of 14.159 million shares of Class A common stock for Google in 2004 when the giant technology company’s IPO occurred.

At the time, Blaylock & Partners was No. 2 on Black Enterprise‘s BE 100s list of black investment banks. Two other BE 100 firms, M.R. Beal & Co. and Utendahl Capital, also were underwriters on the transaction. Google, the world’s largest and most popular Internet search engine, went public at $85 per share and ended up raising about $1.7 billion. The deal was significant as it marked the first time investment banks of color were engaged with a next-gen Silicon Valley company on such a transaction.

Some investors were not pleased about how Google decided to sell its stock at an open auction. That method was different from most IPOs, where a small group of investment banks sells shares to mutual fund managers and other professional investors.

Yet, it still was one of the largest technology IPOs in U.S. history. The Mountain View, California-based Google is now part of Alphabet Inc.

Further, the black firms’ inclusion with the Google IPO also was influenced by the Wall Street Project, an initiative led by the Rev. Jesse Jackson. The civil rights icon used a strategy that included acquiring shares of publicly traded companies to press them as a shareholder to hire minority firms. Jackson’s efforts helped black financial firms land some of the largest transactions on Wall Street and in Silicon Valley.

For example, BE 100 firms were among firms selected as participants in some industry-transforming initial public offerings, including the Google IPO in 2004.

When BE developed the WSP Report Card for its 20th anniversary last year, it found African Americans on the Street are not where they should be. Yet black CEOs agree that the WSP has been key in helping them land deals in some of the biggest deals on Wall Street and Silicon Valley, respectively, over two decades.

Still, observers contend that much more progress needs to be made when it comes to black-owned financial firms being involved with tech deals.

As for Blaylock, he has long been among the nation’s top black investment bankers. In February 2017, he was named to the board of pharmaceutical giant Pfizer Inc. “We are pleased to welcome Ron Blaylock to Pfizer’s Board of Directors. He brings business, financial and leadership expertise, which will be an asset to Pfizer’s diverse Board and to our company,” stated Ian Read, Pfizer’s chairman and CEO.

Currently, Blaylock is founder and managing Partner of GenNx360 Capital Partners, a New York-based private equity firm that focuses its investments in industrial and business services companies in the U.S. Before starting that firm, he founded Blaylock & Co. in 1993.

The investment banker underwrote and advised on over $150 billion in transactions just in 2005.  Blaylock’s firm took part in transactions for a diverse, blue-chip roster of clients, including AT&T, Boeing, CIT, GE, Google, Time Warner, UPS, and Verizon, and other Fortune 500 companies. He is a board member at several corporations and non-profit groups, including CarMax, UrbanOne, W.R. Berkley, and a trustee at Carnegie Hall to name just a few.