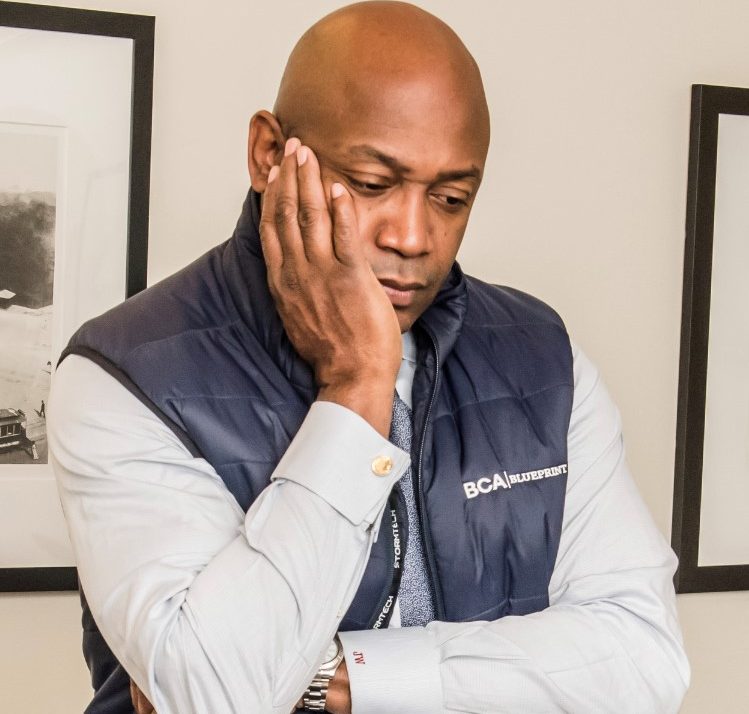 Torturous and debilitating are among adjectives Blueprint Capital Advisors CEO Jacob Walthour Jr. uses to sum up what his investment firm has endured the last four years.

Blueprint is among the few Black-owned firms operating across the country in the multitrillion-dollar asset management industry. And, according to its founder, the minority firm has not only been discriminated against but had one of its proprietary products stolen by one of the major asset management firms.

Amid a legal clash, Blueprint is suing current and past members of the New Jersey Division of Investment (DOI),  BlackRock Alternative Advisors, and Cliffwater L.L.C. The suit filed in June in federal court alleges racial discrimination, theft of intellectual property and trade secrets, retaliation, and unlawful interference with Blueprint’s business with the state of New Jersey by BlackRock Alternative Advisors, a unit of the world’s largest asset manager, BlackRock Inc.

The dispute started in 2016 after Blueprint designed a proprietary product known as FAIR to help public pension funds save millions of dollars on fees paid to money managers.

After establishing ways for New Jersey to achieve similar savings, Blueprint pitched FAIR to DOI to run some of the state’s pension fund money. The DOI in New Jersey is one of the nation’s largest pension fund managers, according to its website. The market value of its total pension was roughly $75 billion as of late May. Blueprint manages $175 million for the state of New Jersey.

Under the guise of performing “due diligence” into Blueprint, the DOI, and its consultant Cliffwater, demanded that Blueprint open its books and share hundreds of pages of research, financial models, vendor lists, and investment strategies that comprised the FAIR program, the suit states.

The lawsuit alleges that the DOI and Cliffwater then sent confidential and proprietary information about Blueprint’s FAIR program to BlackRock, mentioning that firm has an overwhelmingly White executive management and workforce.

Walthour told BLACK ENTERPRISE that BlackRock Alternative Advisors and Cliffwater were in discussions to form a joint venture that would compete with Blueprint’s FAIR program and conspired to replace Blueprint which was the program’s innovator. He said his firm spent years researching the concept behind the FAIR program and invested $5 million to develop the infrastructure to execute it.

The lawsuit further states, “DOI officials admitted to Walthour that the agency had an aversion to minority- and female-owned businesses, and that BlackRock was in fact setting up with New Jersey the same program Blueprint had proposed. After the DOI publicly announced its decision to implement the FAIR program with BlackRock in July 2016, Walthour met with the then-director of the DOI.

The suit states the DOI official admitted that New Jersey was “not a fan of investing with women- and minority-owned firms.” Walthour says the defendants gained access to Blueprint’s information through fraudulent means and misappropriated that information.

In its complaint, Blueprint accuses the DOI and Cliffwater, along with individuals named as defendants personally, of promising a contractual relationship and a $500 million investment to Blueprint in exchange for exclusive rights to use Blueprint’s FAIR program.

“The $500 million is what the state of New Jersey dangled in front of us to get our information,” he says. “A huge injustice occurred when New Jersey backed away from that investment, tells Blueprint to take it, and then gives the business to White-owned firms.”

Lawrence M. Pearson, a partner at Wigdor L.L.P., the firm representing Blueprint, stated in a news release, “As the Complaint makes clear, a DOI official admitted the discriminatory reason for Blueprint being cast aside for BlackRock, whose own CEO has acknowledged its serious shortcomings regarding diversity. Through their alleged actions, BlackRock and the New Jersey DOI both betrayed the public trust and did their best to hobble a promising minority-owned business.”

Calculating the real cost of racism

Founded in 2015 by Walthour and Carrie Pickett, Blueprint has about $1.2 billion in assets under management. Its clients include pension funds, endowments, foundations, and wealthy families.

Walthour swears the failed deal hurt his firm’s growth momentum. If Blueprint’s initial proposal to the state of New Jersey was implemented as planned, Walthour estimates his firm’s asset under management today would exceed $4 billion. More importantly, he says, his firm missed at least $3 million per year in revenue since 2016 from not landing the deal.

“Our revenues now would be about five times higher than what they are,” he says.

Blueprint is seeking more than $40 million in compensatory damages, aiming to be made whole from the loss of revenues the firm would have acquired had the incident did not happen, Walthour says. He also is hoping his firm’s suit will lead to justice for other minority firms who have been discriminated against within the financial services sector.

“Our days of going home and quietly crying to our families had to be over,” Walthour says, referring to the suit being filed now.

“We have a documented four-year history of readings, emails, and letters to support what we are saying,” he adds. “I will tell you that anyone who knows me will tell you I am not a frivolous person, and if I did not feel this case was an absolute winner, I would not be bringing it.”

Jennifer Sciortino, director of communications for the Office of the Treasurer in New Jersey, emailed BLACK ENTERPRISE this response to Blueprint’s suit:

“Litigation has been instituted in the federal court for New Jersey by Blueprint Capital Advisors, the general partner of one of the Department of the Treasury – Division of Investment’s (DOI) alternative investment funds. The claims made center around the development of an investment opportunity with Blueprint Capital which began in the prior administration. It was during this administration that the investment was finalized on the terms negotiated by the parties.

Further, “The Division firmly and unequivocally condemns hatred, bigotry, and racism in any form and is committed to providing opportunities for Minority and Women-owned Business Enterprises (MWBEs) to do business with the state. This mission is central to the Division’s core belief that diversity among its broker-dealers, investment consultants, investment advisors, and alternative investment fund managers will lead to better risk-adjusted investment returns.”

“As a result, the utilization of MWBE fund managers has accelerated in recent years. Since January 2018, $1.3 billion of $3.2 billion in new capital has been committed to MWBE fund managers, representing 39% of all newly committed capital. Investments with minority and women-owned fund managers now comprise approximately 11% of the total market value of the Division’s alternative investment portfolio.”

“The Division also has engaged in a wide range of outreach efforts, participating in conferences targeted specifically to expanding opportunities for MWBEs and soliciting qualified MWBEs through a link on its web page. Last fall, the Division hosted a roadshow sponsored by the National Association of Investment Companies (NAIC), a trade association of MWBE fund managers, to introduce the Division’s staff to more than 30 MWBE fund managers.”

BlackRock: no discriminatory or unethical conduct

For its response, Mark McCombe, BlackRock’s senior managing director and chief client officer, stated by email, “BlackRock demands fair, equitable, and ethical practices by its people in all our business dealings.”

“A review of Blueprint’s allegations by BlackRock and an outside law firm has found nothing inconsistent with our standards nor anything suggesting any wrongdoing by BlackRock. Nor have we found any evidence that BlackRock improperly received any materials or other information regarding Blueprint’s plans or proposal as alleged.”

Further,  McCombe says BlackRock participated in a competitive selection process run by the New Jersey State Division of Investment in 2016. McCombe said BlackRock had “no knowledge of what, if any, discussions Blueprint might have had with New Jersey prior to approaching us this year threatening a lawsuit, nearly four years after the New Jersey mandate was awarded to BlackRock.

“BlackRock has no tolerance for discriminatory or unethical conduct. It is fundamentally at odds with BlackRock’s core principles and culture. BlackRock has demonstrated we take action if we find misconduct by an individual in our firm. We have found none in this matter. We recognize the systemic challenges facing minority-owned firms in our industry and are committed to promoting positive change.”

He also stated, “We have long worked to build relationships with minority-owned partners through our Emerging Brokers program, which last year traded $110 billion through Black- and Latinx-owned firms. We will continue to work to advance inclusion and diversity across the industry and take aggressive action whenever we see conduct within BlackRock that is inconsistent with our values.”

Finally, the consulting firm, Cliffwater, issued this statement: “Cliffwater condemns discrimination in any and every form. There is no place for discrimination of any kind in our society. We have investigated the allegations made by Blueprint and have found no evidence whatsoever. Blueprint also has failed to provide any evidence that it has to support these allegations, as is clear from the lack of evidence in their complaint. We will defend this matter vigorously and believe that the claims against Cliffwater have no merit.”

Blueprint awaits its day in court

Blueprint expects court proceedings to begin within the next three months.

Simultaneously, some new revelations have surfaced since the suit was filed. David Jefferson Sr., chair of the National Action Network New Jersey Chapter, and 50 pastors signed a letter sent to New Jersey Gov. Phil Murphy to address the case involving Blueprint and ask that Black people and Black firms get treated fairly.

In early July, a cease and desist letter was issued by Blueprint’s to stop New Jersey DOI officials from contacting Blueprint’s investors after the Newark, N.J.-based company filed the suit, according to a news release.

The suit occurs as major corporations and philanthropic organizations have made extraordinary pledges in the wake of the death of George Floyd and other African Americans that sparked protests and rising concerns of systemic racism across America. The suit also comes after a 2019 study that revealed Black investment fund managers had faced racial bias for years despite delivering top returns.

Hoping it’s a game changer for the asset management industry, Walthour wants the case to shine a spotlight on what he says African Americans have known for years but few people willfully talk about: Systemic racism exists on Wall Street when it comes to White firms doing business with Black-owned firms.

A 30-year Wall Street veteran, Walthour noted an asset management industry report that showed firms owned by minorities and women represent just 9% of mutual funds, 8.8% of hedge funds, 5.9% of private equity funds, and less than 3% of real estate funds. All told usage is even lower: firms owned by minorities and women manage only 1.1% of the industry’s total $71.4 trillion in assets under management.

From that standpoint, Walthour said Blueprint’s legal fight could be a landmark case because it will expose how decisions are being made. He also hopes the case shows how African American and Latinos, as well as firms they start, are systematically being excluded from investment management opportunities.

“The consequences of this case are greater than Blueprint,” Walthour says.