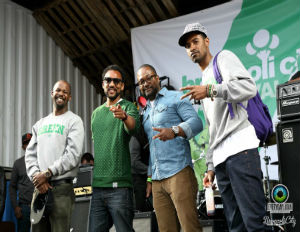 Growing a name as one of the most popular festivals in the Washington, D.C. area, Broccoli City is far different than your average event that connects hip-hop artists with its screaming fans. Started in 2013 by a group of four young black men who saw the need to bring positivity and lasting change to urban communities, Broccoli City Festival serves as an annual event that merges environmental justice, health education and physical activity with hip-hop culture.

With this year’s star line-up of performers including Erykah Badu, Jaden Smith, Willow Smith, Tiara Thomas and more, BlackEnterprise.com caught up with the founder of the Broccoli City movement, Brandon McEachern, to get insights on how the festival got started, the mission behind the brand and the community work they do year-round to ensure their message on healthy eating is delivered to the African American community.

BlackEnterprise.com: How did Broccoli City Festival get started?

Brandon McEachern: Broccoli City started as just a t-shirt line. When I moved to L.A., I was working at this skate shop on Melrose and people were making t-shirts and I was like “Wow, that’s super cool. This is what you do as a job? You make t-shirts and sell them.â€ I just thought it was a really cool idea, so we ended up starting a t-shirt company called Broccoli City. We made the shirts organic and then we came up with a tag line that read “Organic and Flyâ€ on the t-shirts. Eventually, we started getting emails from people who were like “I just cut my hair. I’m going natural.â€ And we were like well we just meant the shirt were organic, but we saw that people were really taking it to the next extreme.

Once I left that t-shirt job I was working in Santa Monica and I noticed a lot of white people riding their bikes and just being extremely happy, but when I would go to Crenshaw to get my hair cut or to eat, I started paying attention to the environment there. In Santa Monica I saw a lot of juice bars and healthy spots, but in Crenshaw, I saw nothing but liquor stores and McDonald’s on every corner and I just started to put those two things together. I always thought if somebody came to me and was talking about living healthy, I would love for them to look like me and I would love for them to talk like me because that way it’s relatable and that’s where the festival came along. It was like how can we make Earth Day fly? How can we make it cool? How can I make the younger me want to come and start making these changes?

Did you have any concerns about starting a festival in a city such as D.C. that’s not usually known for music concerts?

No, not really because when I look at D.C. I think of chocolate city. It’s a whole bunch of us with very good jobs, a lot of us come from historically black colleges and we just felt like D.C. was the epicenter for change at least on the East Coast. My family is from D.C. and my partners are from D.C. as well.

What do you think has been the key to successfully getting the message out there and garnering such a large crowd of people to support the festival in just a few short years?

I think it was needed and I think it just came at a good time. I think Instagram and things of that nature helped to promote it. I always tell people this, but vanity is a huge part of health because everybody wants to be healthy and show themselves off and it’s a huge comparison thing. [The festival] is also a very organic thing and I think people can tell that too. They can tell that Broccoli City came from somebody who is just like them. It’s not a huge corporate entity behind it. This is four black men trying to put it together and I think people identify with that and they know that they are a part of our success as well.

What challenges did you guys face with starting the festival and having no major corporate support behind you?

Of course, there were a lot of challenges just in regards to trying to get capital, and one of my partners knew someone who was profitable enough to invest in us our first year. But a lot of challenges came when I would go to these corporate entities and say “We’re doing a multi-cultural Earth Day celebration.” They go, “Multi-cultural…so you basically mean black people and you’re talking about health? No, we’re good.” So, I will definitely say that the major push back was that people just didn’t believe that the African American culture wanted to live a healthy lifestyle.

How do you guys work to spread the message and purpose of Broccoli City throughout the entire year?

We do that in a lot of ways. We actually teach classes in Southeast D.C. through some of our nonprofit partners. We also have an urban garden that we deal with in Southeast D.C. as well and then we also have visual content. Broccoli City has worked with the California Endowment to do a small documentary project surrounding environmental issues and social justice issues in California. We’re also always giving people the information they need whether it’s through our Twitter, Facebook, or website.

To learn more about how you can attend Broccoli City Festival in D.C. on April 25th or its West Coast event in Los Angeles visit bcfestival.com.