Dee Barnes, Who Dr. Dre Once Brutally Beat Up, Claps Back at His NSFW Comment That Made Mary J. Blige Cringe 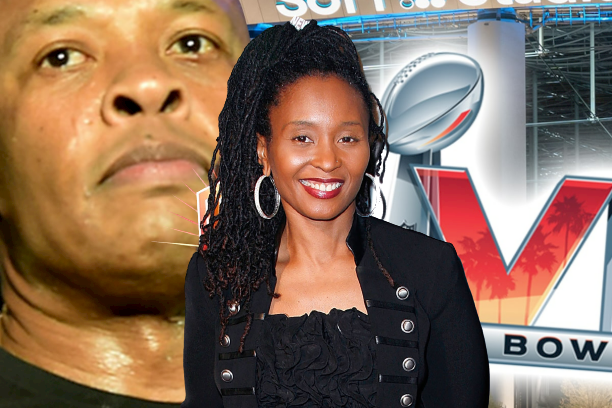 Pioneering hip-hop journalist Dee Barnes, who shared that she was previously brutally beat-up by Dr. Dre in his N.W.A. heyday, took to Twitter to slam the poetic artist for a cringy comment he made during a Super Bowl LVI press conference ahead of the star-studded show.

While speaking at a press conference on Thursday along with the Queen of Hip-Hop Soul Mary J. Blige and Dre’s old-school partner-in-rhyme Snoop Dogg, the “Forgot About Dre” rapper said there would be a few on-stage surprises. And Snoop chimed in to add that having a wardrobe malfunction wouldn’t be one of them, TMZ reports.

The “wardrobe malfunction” seemed to be a  diss aimed at Justin Timberlake for the Janet Jackson nip-slip that altered her career.

But with Queen Mary by his side, Dre upped the ante of expectations when a reporter pressed him about those “surprises” during the highly-anticipated scheduled Superbowl LVI Halftime Show performances that also include rappers, Kendrick Lamar and Eminem.

Although Dre said he can’t divulge that info, he jokingly said he talked to Snoop and Eminem in particular about keeping their man-parts in their pants.

Check out the clip.

“I had to talk Snoop and Eminem out of pulling their penises out,” Dre said. “Especially Eminem.”

The comment seemingly shocked Blige. The “No More Drama” singer who was indeed sitting smack dab in the middle of some more drama, lowered her head and put her hand to her face while a collective gasp could be heard emanating from the audience.

Barnes, whose stage name was Sista D, and who admitted to being physically assaulted by Dr. Dre at a rap industry party in 1990, slammed the almost-billionaire Beats by Dre creator for the jarring commentary.

Why would you talk about not pulling out penises in front of the The Queen of Hip Hop Soul, in front of international media. #BHM

“Very crass and petty,” said one commenter about Dre’s remarks.

Barnes and Dre have a history that stems from her days as the host of Fox’s hip hop show Pump It Up! Barnes reportedly was physically and violently assaulted by Dre and filed charges to which the rap star pleaded “no contest.” But Barnes said her claim caused her to get blacklisted from the industry and she spent years struggling including a recent call for financial help on GoFundMe.

Dre later apologized to the women he hurt.

“I apologize to the women I’ve hurt. I deeply regret what I did and know that it has forever impacted all of our lives,” he said.

Although his ex-wife Michel’le wasn’t mentioned in the apology, she too has reported a series of violent attacks at the hands of Dre during her marriage, the HuffPost reports.

“When you’re living in it, you can’t see it. But I couldn’t believe that I was really living like that,” she said during an interview with The Huffington Post. “And it really resonated with me. Never did I wake up and ask Dre, ‘Why did you hit me?’”

Barnes later became a champion for women who were sexually assaulted and forced to keep a tight lip for fear of retaliation by powerful men who could derail their careers.

Let’s hope the Superbowl performance will be drama-free and a family-friendly show.