On the Job: Gender Identity & Sexuality Discrimination in the Office

As a young girl, Kylar Broadus (born Karen) always knew that he was in the wrong body. He spent endless nights praying for God to change him from female-to-male. Finally, in 1995, after discovering that sex change procedures were covered through his company’s insurance policy, he began a 15-year transition from Karen to Kylar, but the Columbia, Missouri native never thought that this decision would come at the cost of his job.

After seven years as an employee at a major financial institution,Â Broadus told his boss of his decision to have a sex change. In addition to beginning hormone therapy treatments, he changed his name to his present moniker and began dressing in a more masculine fashion. Broadus alleges that his boss created a hostile work environment where his every action was recorded; he was questioned about his sex life; he was accused of trying to coerce a White female superior into an affair; and he wasÂ inundated with extra work assignments that were frequently changed at the last minute. The covert harassment eventually became overt when Broadus’ superior informed him that he would never advance in the company unless he changed his appearance.

“When I cut my hair off, he said, ‘[You’ll] never be promoted with [your] hair like that, and next time you decide to do anything with your hair, call me first,’â€ recalls Broadus, now 47. “He said, ‘It was radical.’â€

Broadus sought help by reporting the abuse to his human resources department only to be “scolded like a child and told that women don’t do this.â€ The stress from work led Broadus to therapy sessions where he was diagnosed with depression, severe panic attacks, and post-traumatic stress disorder. At the end of his rope, he eventually left on a constructive discharge notice and sought legal retribution. The lawsuit was filed under Title VII of the 1964 Civil Rights Act, which prohibits employment discrimination based on race, color, religion, sex and national origin. However, the case was dismissed because Broadus resided in Missouri, which is one of 38 states where it remains legal to discriminate based on gender identity or expression, compared to 29 states where–according to the Human Rights Campaign (HRC)–it remains legal to discriminate on the basis of sexual orientation.

Michael Greenidge, a 29-year-old armed guard in Teaneck, New Jersey, has a different-yet-equally troubling experience with discrimination. As an openly gay male with self-described feminine features working in a traditionally masculine industry, he has quietly endured verbal attacks and threats from his colleagues.

“I experienced name-calling, like faggot, and [been told] that I’m going to hell,â€ says Greenidge. “My co-worker once told me to meet him outside and we started arguing, but I kept it from getting physical.â€

He wasn’t as lucky during another incident that took place when he worked as a chef at a cafÃ© in New York City. After being called out his name and then being struck, Greenidge was forced to defend himself. Despite the discriminatory nature of both instances, he refused to report either to human resources or seek outside counsel out of fear of losing his job, especially during the recession.

“I feel like if I take this to lawyers that I won’t be able to handle all of that,â€ says Greenidge of the potentially drawn out legal process. “No one wants to lose their job in a time like this and so they just deal with it.â€

Treivor Branch, founder and CEO of The Branch Solution, a workplace issues/human resources consultancy company, notes that both Broadus and Greenidge’s examples of discrimination would have had more positive outcomes had there been federal protections in place for sexuality and gender identity based discrimination through the Employment Non-Discrimination Act (ENDA). The bill, which has notÂ yet been passed,Â aims to extend federal employment discrimination protections currently provided based on race, religion, sex, national origin, age and disability to sexual orientation and gender identity.

“Discrimination, unfortunately, is not something that is going away anytime soon,â€ says Branch. “We’ve seen a rise in sexual orientation discrimination complaints and that shows the needs for these types of bills.â€

With minimal evidence of ENDA being signed into law anytime soon, Branch notes that it is the responsibility of individual companies to address workplace harassment and discrimination internally. According to the HRC, as of September 2009, 434 (87%) of the Fortune 500 companies had implemented non-discrimination policies that include sexual orientation, and 207 (41%) had policies that include gender identity.

“If a company is in a state without a state law, the company can amend their current policies around harassment, discrimination and workplace policy to include sexual orientation and gender identity,â€ says Branch. “That’s why it’s good to go to human resources first and always seek outside counsel as well.â€

According to Nolo, a low-cost legal counsel service, the best way to deal with any form of discriminatory complaints in the workplace is quickly and carefully. The victim should never feel fearful of seeking remediation for a complaint of harassment, regardless of gender or sexuality. It is HR’s responsibility to investigate any and all claims by talking to both the accused and accuser, as well as possible witnesses. It is also advised that victims document all instances of harassment. That could include simply jotting down dates and times of harassment or saving all emails and memos that may be used as evidence. Having solid proof is the major difference between a case of he said/she said and an actual legal case.

Today, Broadus provides counsel to others as he speaks and lobbies on the national, state and local levels for transgender and sexual orientation equality in the workplace. In addition, he has served on the board of the National Black Justice Coalition, a leading civil rights organization dedicated to empowering black lesbian, gay, bisexual, and transgender (LGBT) people. Broadus’ present work is a testament to his hope that one day LGBT professionals will be judged not by their bodies or sexual orientation, but by the quality of their body of work.

“That’s what we’re fighting for–everybody to have expression of who they are. I’m not harming anybody,â€ he says. “It’s not about sex or anybody else. It’s about me. This is who I am.â€

Be sure to read these related stories… 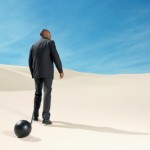