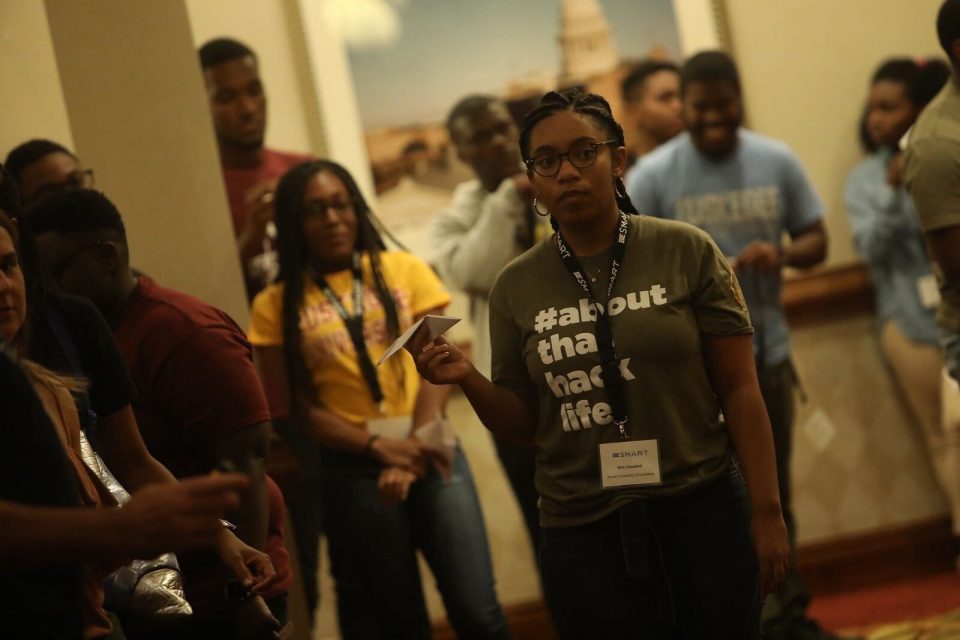 Newly hired Taiwo Raji has had a wonderful experience so far working as a junior developer on the data privacy team at American Airlines.

Raji, armed with a bachelor’s degree in computer science from Tuskegee University in Alabama, gave BLACK ENTERPRISE some of his impressions about working for American.

“Everyone around me is so helpful and patient and it has really allowed me to feel comfortable and just focus on learning my job,” he says.

“One of the most valuable lessons I’ve learned is that there are people available as resources for you and you just have to be comfortable enough going to them.”

Another new employee, Erin Campbell, reflected on her experience working in information technology at the Fort Worth, Texas-based company. She was excited to find that there is a lot of emphasis on learning journeys with her team. A graduate from Xavier University in Louisiana, she is a software developer on the pilot crew management ecosystem team. Her duties include doing data-based processing to help modernize the flight operating system.

One of her earliest assignments was to learn about a particular topic and then give a presentation about it to the rest of the team. “There’s a lot of communication and a lot of opportunities to familiarize ourselves with new programs and processes,” Campbell says.

Welcome to fresh efforts by American Airlines to recruit, retain, and promote Black Americans within its IT division.

Another four HBCU graduates were hired from events the carrier attended. All 14 of the hires started in the company’s IT division in June 2020. The next BLACK ENTERPRISE annual Hackathon will be from Oct. 9–10. Once again American Airlines will sponsor the event, which, for the first time, will be presented in a virtual format.

The hires are compelling as American is beefing up diversity in its IT unit as the industry struggles with public health safety issues and economic challenges due to COVID-19. Airlines are now facing rugged conditions after posting several years of profitability. American Airlines reported in August it will lay off 19,000 workers in October after federal aid to protect job lapses, according to CBS News. The news came just after Delta Air Lines furloughed 1,941 of its pilots, which occurred weeks after major airlines warned they would have to furlough more than 80,000 pilots, flight attendants, and other workers once the $25 billion in government aid expires in late September.

Still, American Airlines has not reduced its recruitment of Black professionals. American Airlines spokeswoman Andrea Koos says the company spends millions in recruiting and hiring. She added that in IT specifically, the hiring is focused on bringing in diverse talent.

American Airlines Executive Vice President and Chief Information Officer Maya Leibman said the company stayed the course because it was important to do so. She noted other companies decided not to recruit or make job offers because of the pandemic, but American Airlines wants to keep growing when it comes to adding diverse talent.

“We knew it was important to bring on these new hires from HBCUs and bring new technical skills to our organization,” she says. “These new hires can help us take our transformation to the next level.”

Leibman says IT touches most facets of the business, from shopping for a ticket to getting on board and collecting baggage at a customer’s destination. It also impacts many of the airlines’ more than 100,000 employees, including how pilots get flight plans and how flight attendants can serve drinks aboard the aircraft.

Technology also plays a huge role in how the airline addresses the new COVID-19 climate. For instance, the carrier has a new touchless check-in experience that lets customers use the American mobile app to get a baggage tag and check luggage without touching the kiosk. A new automated refund process was added for customers who bought a ticket but decided they did not want to travel as those plans were disrupted by the pandemic.

The pandemic has created a big need for IT jobs at American. For instance, there will be a demand for software development jobs to help the carrier boost revenue or cut costs. The airline needs software developers to help ensure the customer’s check-in experience runs smoothly. “Technology will play a huge role in our ability to manage and weather this crisis,” Leibman says.

Simultaneously, the pandemic has presented new challenges. Since the carrier was aware new hires would begin work remotely, it created a fun two-week virtual boot camp. The virtual onboarding included ice-breakers. New hires took part in technical training, an overview of the carrier’s software stack, a mini-hackathon, and sessions with many senior executives, including American Airlines CEO Doug Parker.

“This was the first time we had onboarded new hires in an entirely online way and we wanted it to be a special experience for them,” company spokeswoman Koos says.

The HBCU new hires are part of ADEPT, a two-year program geared toward promoting business and leadership skills and exposing new hires to diverse opportunities at American. ADEPT, which is only for software developers and software engineers, provides new hires with a rotational job program, lunch-and-learns with senior executives, class mentors, and opportunities to learn about different areas of the airline, including visits to its airport operations and maintenance hangars.

The carrier views diverse candidates as critical to its IT department. Leibman says such diversity fosters new opportunities and innovation as new hires bring their own experience and work to the table.

“When you have a diverse workgroup, it brings different perspectives that a non-diverse (group) would not have to offer,” Liebman says. That may help the carrier gain a different mix of customers, employees, and perhaps help boost its revenues and profitability.

The airline, in turn, helps fresh hires understand what it is like to work for a technology organization.

As head of emerging technology at American, Phillip Easter says his team scouts out new technology that can be relevant to the airline space and can help solve current or future problems. For example, that might include probing the virus threat, machine learning, and artificial intelligence. It could also be technology to automate current systems or new technologies to improve customer experiences in the future.

To help build employee engagement and morale, Easter’s team typically conducts such events as internal workshop hackathons to educate employees on new technology. His team engages with colleges and holds hackathons for them. “That allows us to socialize the fact that American Airlines is a technology company as well as scout out and hire new talent.”

Further, Easter values the partnership the airline has with BLACK ENTERPRISE, using the BE Smart Hackathon as a talent vehicle. He says BLACK ENTERPRISE does a phenomenal job of integrating with the HBCUs and identifying talent that can come to the event, being a bridge to the students for the carrier at colleges and universities. “It’s a hand-and-hand partnership: We have great technical jobs and work environment and BLACK ENTERPRISE socializes that and makes the connection for us.”

On the recruitment front, Easter has higher expectations of the upcoming virtual BE Smart Hackathon compared to the live version in recent years. Without students having to clear financial or logistical hurdles, Easter says, the virtual event could expose American Airlines to more HBCUs; he projects it might attract 200 students versus only 50 before.

For Campbell, the hackathon was a good way to practice computer science in a non-classroom capacity and interact with computer science people from other schools. At the event, she learned not to always approach projects with a purely theoretical mindset, or just from the perspective of making something. It taught her to start thinking about the business logic of how a real company would have to approach things like privacy and operating within regulations. “Basically, it expanded my paradigm to consider more factors when thinking creatively,” Campbell says.

For Raji, the event helped him learned a lot about the company and its partners and how they leverage technology to solve problems. “I got to meet a lot of other Black engineers and really add to my network on top of that,” he says.

When a hackathon ends, American Airlines employees talk about how many new hires it will make. Candidates are flown in for a day, have campus tours, and meet with key executives and potential managers. Afterward, Easter says, the airline decides if it wants to make them an offer.

It’s a quick process. He says American tries to extend an offer with 24 hours of a campus visit. Because of that, Easter says, the carrier has a high acceptance rate, about 90%. He noted that seven of the 14 HBCU hires are women, an interesting statistic given the relatively low number of women in engineering. “So, to have half of them in engineering is very phenomenal.”  Overall, the new hires work in software development positions, programming software for employee or customer use.

In his short time at the airline, Raji says he already has participated in two internal hackathons “where the problems we were trying to solve could provide real business value to the company.” He has also met with several vice presidents, managing directors, and even the CEO.

Easter believes diverse talent is an additive to the innovation process. A trend is becoming established, he says: a company that embraces diversity in its hiring will ultimately be more innovative. Greater diversity helps you develop software more inclusive of your customer base. “We have more software solutions that allow all customers to engage with us.”

Another area American Airlines takes very seriously is mentorship and guidance for each recruit to promote career success, retention, and advancement. Easter says key leaders are assigned to work with them regularly to see how they are progressing. And their managers work with them on a “learning journey.” New talent is embraced into American’s family-oriented culture.

And like any family, finding your place takes time.

In terms of career aspirations, Raji wants to be a technical leader in his field: “It’s a little vague right now because I’m still learning and trying different parts of computing to find the best fit for me.”