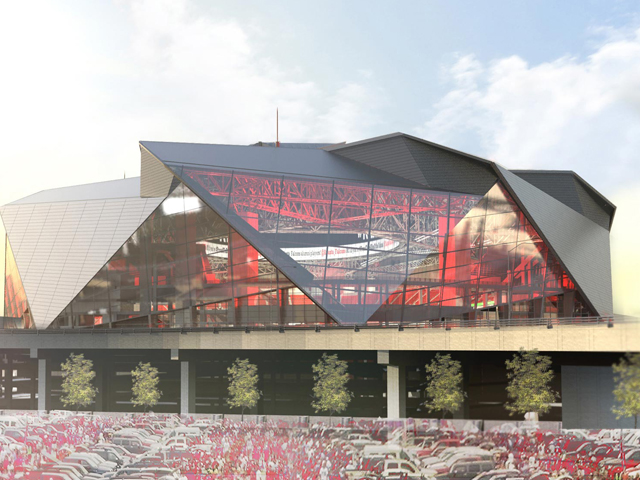 An iconic BE 100s company, H.J. Russell & Co. is launching a new division that will build or renovate everything from sports stadiums to entertainment venues nationally.

Other projects the Atlanta-based company will take on include public assembly venues such as auditoriums, convocation halls, civic spaces such as parks, courtyards, and promenades as well as convention centers and exhibit halls.

Russell, No. 14 on the 2017 BE Top 100 list with revenue of over $253 million, plans to leverage 25 years of building those type of structures and applying its industry expertise to become a bigger player in the highly sought after and competitive business in the US; renovating existing facilities will be among the segments Russell will target.

Taking Their  Facilities to “Another Level”

CEO Michael Russell says there are thousands of college sports facilities from coast to coast, and it’s not unheard of for colleges and universities to have $50 million-plus renovation budgets to revamp their facilities. “We would gladly be a part of helping them take their facilities to another level with our decades of proven experience.”

Founded in 1952 by the late legendary Herman J. Russell, the company has grown into one of the nation’s largest minority-owned real estate development and construction services firms. It has evolved from its start as a plastering business to a builder that has changed the skylines of American cities, particularly in Atlanta.

Herman Russell invested in developing the west side of Atlanta before developing the west side was trendy. Exactly 25 years apart, the Mercedes-Benz Stadium was built with Russell’s involvement as part of the HHRM Joint Venture ((Holder, Hunt, Russell, Moody) and it helped build the Georgia Dome, which will be torn down this month in the Barton Malow, Beers, Holder, Russell Joint Venture, a news release states.

Helped Build the $1.5B Stadium Where Atlanta Falcons Play

Russell is certainly no novice to building big venues, something it has done for a quarter of a century. Its work on high-profile projects includes the Olympic Stadium in Atlanta, the Smithsonian National Museum of African American History and Culture in Washington, D.C. and the Phoenix Convention Center to name a few. Now, it hopes to grow and sustain its long run in the business with S.P.A.C.E.

“We believe we can, with our experience, help other markets and communities shape their skylines and sports, convention and entertainment patron experiences by building exceptional facilities just as we have and will continue to do in Atlanta,” Russell said in a press release.

The company hopes that being minority-owned and finding clients that value the diverse perspective it can offer will help add new business and set it apart from rivals.

“We want to work with clients who want to have a blended team that in many cases looks like the customer base or fan base they are ultimately trying to serve,” Russell says.

On revenue growth, Russell says a dollar amount “is not our major concern for year one.”  He says the focus is really about continuing to grow the company’s presence in the S.P.A.C.E. sector and landing three new projects of significance in 2018. “We do, however, anticipate an incremental increase in revenue in 2018 and beyond as a direct result of this initiative.” The company made some recent strategic hires to support the new division.

Projects that Russell is involved with include the Atlanta Hawks Development & Practice Facility in Brookhaven, Georgia, this year. Another will be the Philips Arena Renovation in Atlanta in 2018, where the Atlanta Hawks play. In 2019, Russell will work on the Georgia International Convention Center NBA D-League Expansion in College Park, Georgia.

Yet, a challenge with the new unit is establishing brand awareness with potential clients that Russell has done multiple projects beyond Atlanta.

Another will be making it known that the firm’s program management business is equal in size to its construction business. The program management group represent the owners and orchestrate every aspect of a project outside of construction. Russell says the firm has been providing these services at the national level for decades.

“We want the nation to know that we are here, we have the expertise, we have a unique perspective and we have the resources to support these types of projects anywhere,” Russell says. “We’re ready to go.”