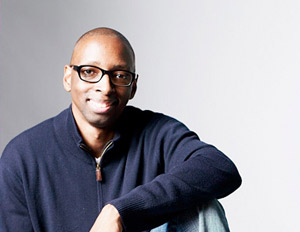 Fred Mwangaguhunga made a business out of Black news (Image: Press)

If you’re a gossip-junkie, odds are that MediaTakeOut.com is among your prime online destinations for staying abreast of urban celebrity shenanigans. This fall, however, the popular site is set to feature a different kind of drama as the company evolves to include reality programming. “Media Take Out Presents: First Date,â€ an original reality-based video web series, is scheduled to premiere on September 18. In each weekly episode, one man must choose between three women who are vying for his attention in a dating show format that Media Take Out founder Fred Mwangaguhunga describes as an African-American version of the 1999 TV series, Blind Date.

“There are young, good looking people. There’s controversy, there’s drama involved,â€ explains Mwangaguhunga, who has partnered with Fisher Klingenstein Films and the show’s executive producer Dan Garcia in the venture. “It’s definitely going to be PG-rated. No nudity, no foul language, but we are going to push the edges.â€

The Web series represents a significant shift in content programming for Media Take Out. The website–which was founded in 2006 and now averages 300 million page views per month–is based on a simple but effective formula of outrageous headlines, biting humor and often racy photos of Hollywood stars, athletes and musicians. Now, Mwangaguhunga, a former attorney turned entrepreneur, is convinced that the new webisodes will help Media Take Out grow from merely being a heavily trafficked blog to a full-scale entertainment company.

If all goes according to plan, Mwangaguhunga, 37, hopes to add a diverse schedule of video content–including other reality shows and scripted dramas–to the Website over the next several years. The gossip site founder claims that since BET and TV One have made noticeable efforts to skew programming to older audiences there is an opportunity to connect with a significant demographic of 18-25 year olds. Plus, he explains that those same young people (Media Take Out’s main readership) are spending an increasing amount of time online. He’s got the numbers to back it up: A 2010 survey of 1,000 U.S. consumers showed that 83 percent of viewers under 25 “watched some, most or all of their TV programming online.â€

“You look at all the demographics–the under-25 market is watching less physical TV on a television. They’re watching more on their computer, on YouTube, on Hulu, on iTunes,â€ says Mwangaguhunga. “The question is which company is going to be best suited to take advantage of it. We’re coming in early and making aggressive steps to be that company.â€

Mwangaguhunga decided to bring the dating show to the Web earlier this year after realizing that the half-hour episodes, which Garcia had already produced for potential television broadcast, could have a unique home online instead. With some clever editing, those segments have been pared down to six to 10-minute spots more suitable for viewing on the Web. Currently, there are 52 “First Dateâ€ episodes in the can, which will be rolled out weekly.

In addition to the Web broadcasts, Mwangaguhunga eventually plans to release the show’s original episodes in a DVD boxset format as well as make them available for download via iTunes, Netflix streaming and Hulu. That’s where Fisher Klingenstein Films comes in. The Los Angeles-based company, which specializes in acquiring and distributing films, TV and digital content, has developed the strategy for establishing additional revenue streams.

Danny Fisher, the company’s CEO, says there are huge benefits to developing this series primarily for online audiences rather than for network or cable television. “What we’re establishing is a self-sufficient enterprise that we can control and we can release without having advertisers tell us what we can and cannot do, without having networks tell us what we can and cannot do,â€ he explains. “[We are] able to create value in terms of advertising on the Internet and in terms awareness of DVD and digital and ancillary markets. The whole model we feel is groundbreaking.â€

Mwangaguhunga is equally confident. “We’re walking in unchartered territories,â€ he admits. “I’ve been in the business [nearly] six years now and I know my audience, I know exactly what they’re looking for.â€