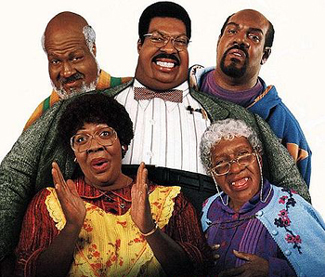 The Klumps may be funny, but obesity in black families is literally as serious as a heart attack.

Obesity is an epidemic that is killing Americans and costing the health care system $80 billion a year.Â  If that’s not alarming enough news for you, how about this?

Obesity is growing faster than any previous chronic health issue our nation has faced. Today, more than one in four Americans are considered obese. According to America’s Health Rankings (www.americashealthrankings.org) if current trends continue, 103 million American adults – or 43 percent of the population – will be considered obese by 2018. Left unchecked, in 2018 alone, obesity will add nearly $344 billion to the nation’s annual direct health care costs, accounting for more than 21 percent of health care spending.

Indeed, obesity is fueling a tsunami of preventable health problems, from diabetes and hypertension to cardiovascular disease, cancer and respiratory disease.

Many public health experts, physicians and others — including myself –Â  believe that obesity has become equal to, and will exceed, tobacco use as the most significant risk factor for death and disease in the nation. This is not surprising. Considering that, while tobacco continues to produce extraordinary health consequences, tobacco use has declined slightly in the past 20 years, while obesity is on a dangerous, and as yet unchecked, upward trajectory.

Obesity is also an epidemic that is taking a particularly significant toll on some of our most vulnerable citizens: communities of color and low-income families. African Americans were 1.4 times as likely to be obese as non- Hispanic Whites in 2007, accordingÂ  to the Department of Health and Human Services.Â  African American women have the highest rates of being overweight or obese with about four out of five African American women considered overweight or obese. In Mississippi and Alabama, approximately 41% of the adult population is obese.Â  To see where your state ranks — and the future projections — go to www.americashealthrankings.org/2009/spotlight.aspx .

As a regular Black Enterprise reader and a supporter of minority-owned businesses, I am especially concerned about the implications of this data on the affordability of health insurance and the impact on the productivity of the minority workforce. These obesity stats will lead toÂ  sicker people, with higher health care costs, who will lose time from work. Lost work time negatively impacts the economic vitality of black-owned businesses. We must get on top of this national public health problem now.

The question, therefore,Â  is:Â  What can we do to reverse this alarming and potentially deadly trend?

First, it’s up to parents to help tackle this health care crisis. When confronted with very limited budgets, families are more inclined to make food purchases based on cost rather than nutritional value.Â  In addition, many lower-income neighborhoods don’t have convenient grocery stores that are reasonably priced. Yet another factor that plays into this epidemic is that some families lack the knowledge or resources to prepare cost-effective meals that are healthy and can last longer. This is a critical issue, as limitedÂ  food choice is associated with a range of health issues, including obesity. According to the Centers for Disease Control and Prevention (CDC), one in three children in the U.S. is obese or overweight, putting them on the road to lifelong chronic conditions like hypertension, heart disease, cancer and diabetes.

Reed V. Tuckson, M.D., is Executive Vice President and Chief of Medical Affairs at UnitedHealth Group, and is responsible for working with all of the companyâ€™s business units to improve the quality and efficiency of health services. He is also a member of the Board of Directors of the United Health Foundation. Dr. Tuckson is also ranked among the Black Enterprise 100 Most Powerful Executives in Corporate America.