Why We Should Be Grateful for Our "Haters" 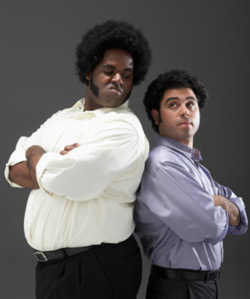 When you spend as much time on Twitter and Facebook as I do, you know that there are certain recurring, seemingly universal themes in your stream of tweets and status updates. One of the most persistent topics is “haters” (also known as “h8ters” and “hatas”), people who for no good reason but pure jealousy are out to get you, put you down, hold you back. Particularly on Twitter, people devote an awesome amount of tweets to their haters.

For some people, the thought of having haters is as fascinating as wondering about life on other planets. And just as pointless. (Curiously, people respond to or talk about their haters, but they rarely block them.) What’s to gain from obsessing about it? My point of view is this: We need to stop hating on our haters. Without them, we probably would not ever come close to achieving our full potential, much less greatness. That’s right, I said it. If you want to be great and do great things, be grateful for haters–you need them.

Have the courage to ask yourself: Could my haters be right? What do they see that my supporters don’t–or do, but don’t have the guts to say? Those who openly oppose you are often the ones who see you most clearly. Just because someone is envious of you, disagrees with you or does not like you does not necessarily mean that their views are totally inaccurate and that you have nothing to learn from them.

In fact, my experience has shown just the opposite. It’s mostly my haters, not my friends, family or “peeps,” who refused to pretend I looked good in that $100 suit, that my presentation skills didn’t suck or that my writing was genius. Friends are full of dishonest approval–they’ll tell you what makes you feel good. After all, they don’t want to discourage you, hurt your feelings or get you mad at them. Haters are far more honest in their criticism than your supporters are in their praise.

That’s why it’s important to be mature enough to listen–not necessarily agree, but truly listen–to your haters. Being able to sift through people’s envy and bad intentions toward you for the valuable truths in their criticism is often a key to greatness–and sometimes even survival. Because, as much as we hate to admit it, sometimes the haters are right. The truth is, haters are good at pointing out our weaknesses precisely because they are being critical–unlike our supporters, they are looking for our flaws. Allowing your haters to point out your vulnerabilities is a great way to address them before they can be exploited.

So, I’ll take honest criticism over dishonest approval every time. You can always disagree with honest criticism. And it can help you keep your game tight. But too much dishonest approval will have you busted, disgusted, alone, unemployed and/or incarcerated. I’ve seen far more people done in by those who blindly approve of everything they say and do, than I’ve seen get destroyed by their critics. Haters can’t really hurt you unless you let them. But being surrounded by people cosigning on everything you do can literally get you killed.

But here’s the real reason you should be grateful for your haters: They will never just admit you’re right, you’re wonderful, you’re better than they are; they’ll force you to prove it. The need to prove haters wrong has always been a far more powerful motivator than the desire to justify the faith of supporters. It’s not our most loyal fans, but our most hated rivals who drive us to bring our A games and force us to check ourselves before we wreck ourselves. For those of us who truly want to be the best at what we do, it’s our haters, not our supporters, who are more likely to motivate us to put in the 10,000 hours of practice Malcolm Gladwell says is necessary to achieve mastery in his book Outliers: The Story of Success. We let our fans (family, friends, even ourselves) down all the time. But we’ll be damned if we’ll let our haters see us at less than our best. Your fans may support and sustain you. But it’s your haters that force you to put up or shut up. And your haters are usually far more reliable than your fans are.

That’s why champions grow to respect their “haters.” They’ve learned that you can’t achieve greatness without them. Shepherd boy David needed Goliath and the Philistines to become King David. Muhammad Ali needed Joe Frazier and George Foreman to become the G.O.A.T. (Greatest of all time.) Michael Jordan and the Bulls needed Patrick Ewing and the Knicks (and especially their true haters, Knick fans). And you can’t convince me that Venus and Serena Williams would have all of those Grand Slam titles if the tennis world had welcomed them with open arms. By the way, these examples prove that appreciating what your haters have to say does not mean you should surrender to them. In fact, the best way to show you appreciate your haters is to hear them out, using their criticisms to identify and correct your weaknesses and get you focused and fired up to whip that a–ahem–win, anyway.

“Alfred, do you have a lot of haters?,” someone asked me on Twitter the other day. I’m sure I do, though I have no idea how many or even who most of them are. All I know is I’ve learned some of my best lessons at the hands of people I considered to be some of my toughest haters. Some of them may have really hated me. Still others were truly jealous and wanted to bring me down. Others may have actually thought they were doing me some good. No matter what their motivation, I’ve learned to value my opposition and to be open to their criticisms. I’d rather have real haters than fake fans.

So go ahead. Call out your haters. But don’t say it like it’s a bad thing. Get past their motives and how they say what they say. Focus on the content of their message and try to see what they see. And don’t be so obsessed with haters that you become one yourself. Because some of y’all on Twitter and Facebook really just need to let it go and get a life. Not trying to hate. I’m just saying.

Now, where my hatas at?