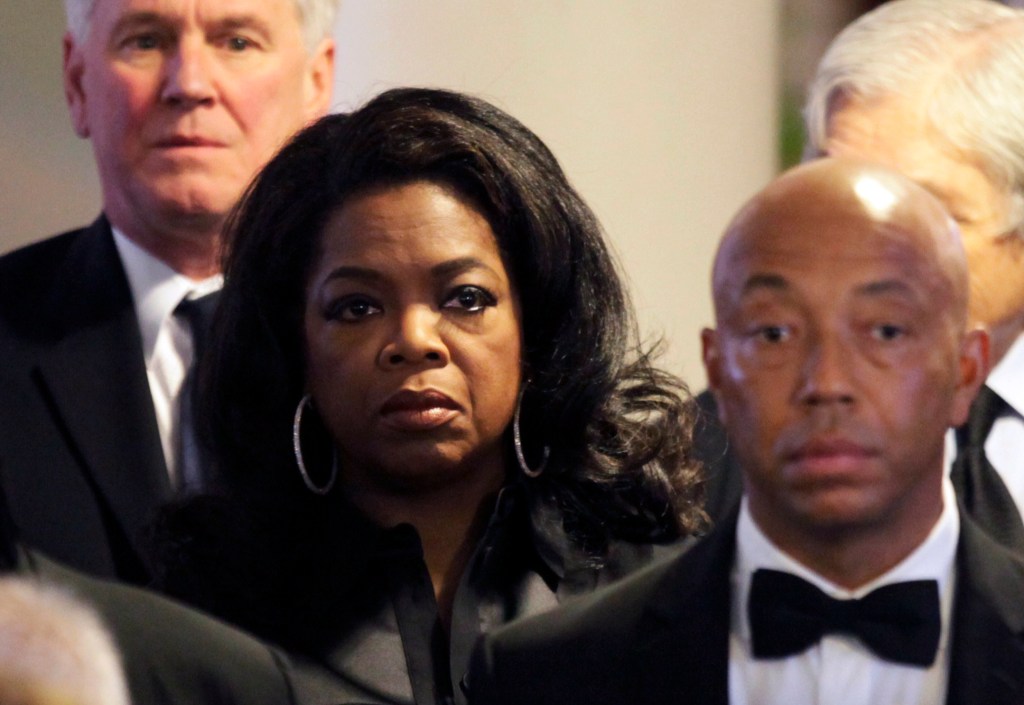 Oprah Winfrey, center, stands with Russell Simmons, right, and other mourners as the casket enters for the funeral of Eunice Kennedy Shriver at Saint Francis Xavier Roman Catholic Church in the Hyannis section of Barnstable, Mass., Friday, Aug. 14, 2009.

Oprah Winfrey has pulled the plug on her involvement in an upcoming #MeToo Documentary featuring a woman who accused Russell Simmons of rape, The Verge reported.

The documentary was slated to appear on Apple TV+, but Oprah said she will no longer serve as executive producer of the project because she and the filmmakers are “not aligned in” their “creative vision.”

The media mogul made the announcement through a statement via Deadline and other media outlets. Her full statement reads:

“I have decided that I will no longer be executive producer on The Untitled Kirby Dick and Amy Ziering Documentary and it will not air on Apple TV+. First and foremost, I want it to be known that I unequivocally believe and support the women. Their stories deserve to be told and heard. In my opinion, there is more work to be done on the film to illuminate the full scope of what the victims endured and it has become clear that the filmmakers and I are not aligned in that creative vision. Kirby Dick and Amy Ziering are talented filmmakers. I have great respect for their mission but given the filmmakers’ desire to premiere the film at the Sundance Film Festival before I believe it is complete, I feel it’s best to step aside. I will be working with Time’s Up to support the victims and those impacted by abuse and sexual harassment.”

Winfrey made the announcement after getting backlash from rappers like 50 Cent, The Game and Simmons himself. They accused the first Black woman to become a billionaire of targeting Black men who were accused of sex crimes, but letting their white counterparts get a pass.

However, as noted in her aforementioned statement, Winfrey said she still believes and supports Simmons’ accusers. Despite this, 50 Cent thanked Winfrey in an Instagram post for removing herself from the documentary.

“Alright, alright, alright Oprah we love you, thank you for responding and if you ever need me for anything I’m here,” the rapper captioned in his post of a screenshot of Deadline’s article.

Alright,alright,alright Oprah we love you, thank you for responding and if you ever need me for anything I’m here.#starzgettheapp #abcforlife

Simmons also responded to Winfrey’s announcement with a long, heartfelt Instagram post to the beloved media icon. In it he says the documentary was troubling because Winfrey had “been a shining light to my family and my community. Contributing so much to my life that I couldn’t list a fraction of it …”

He went on to accept responsibility for being “guilty of exploiting, supporting, and making the soundtrack for a grossly unequal society,” but maintained he has never forced himself on anyone.

This article was written by Isheka N. Harrison for The Moguldom Nation on January 13, 2020.