Oprah Winfrey On Ferguson And Eric Garner: "People Are Awake!" 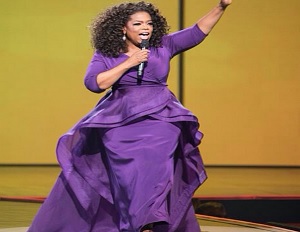 At New York City’s Zigfeld Theatre, the cast and crew of Ava DuVernay’s Selma came out in spades to support the premiere of the Civil Rights era film. During the red carpet of the event, Oprah Winfrey, who also portrays a character in the movie, spoke at length about the untimely deaths of Eric Garner and Michael Brown.

“Even if we didn’t know about a Ferguson, or an Eric Garner or a Michael Brown … they were going on,â€ Oprah told press that was on-hand. “The fact that they may have now become newsworthy or made national or international news doesn’t mean there haven’t been nameless Michael Browns or Eric Garners before.â€ The Martin Luther King Jr. inspired project has been a labor of love for Winfrey and director Ava DuVernay, the latter has been nominated for Best Director for the 2014 Golden Globes.

Oprah, who joined her castmates for the premiere, did not partake in a show of solidarity as David Oyelowo (Martin Luther King, Jr.), Wendell Pierce and others wore “I Can’t Breatheâ€ shirts and raised their arms up in the “Hands Up, Don’t Shootâ€ gesture. Despite that, the OWN Network CEO was optimistic about the end result of the tragic happenings. “My feeling is everything is always happening exactly as it should and on time. There’s no coincidence that this is happening now, but because it’s happening now, people are paying more attention.â€

Her free Life Class lesson upon the Zigfeld Theatre red carpet found Winfrey introspective, as she cited that the recent deaths of unarmed black men should be a stern wake-up call. “Life is always there to teach, enlighten, and open you up to the greater possibilities of what can be done … if you’re willing to be awake and see it. What’s exciting to me is that people are awake! If it took Eric Garner and it took Michael Brown and other instances to do that then … that’s where we are in our evolvement as human beings.â€

Oprah Winfrey, much like her castmates and director Ava DuVernay, believe that this film can serve as an extreme learning device to those who are still on the fence about injustice against people of color in America. “Y’all are not the first to do it … the first to have an idea … the first to want to protest … the first to be upset. [But] I really think that this film can teach people a lot, because what this film says is it’s been done. We didn’t even have the right as citizens to vote in this country, and because of that you had Martin Luther King as a leader joining with his band of brothers with disciplined, rigorous, peaceful protests, and they had a goal and intention in mind.â€

Selma, which stars David Oyelowo and Carmen Ejogo as Dr. Martin Luther King, Jr. and his wife Coretta Scott King, chronicles the explosive three-month period in 1965 when King led a dangerous campaign to secure equal voting rights and march from Selma to Montgomery. His efforts culminated in President Lyndon B. Johnson signing the Voting Rights Act of 1965, which still stands as one of the most significant victories for the Civil Rights movement. In the film, Winfrey portrays voting rights activist Annie Lee Cooper.

Selma hits select theaters Christmas Day and opens nationwide January 9. Be sure to check back later today for our film review!