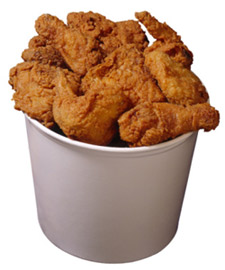 There’s nothing wrong with fried chicken. I enjoy a good drumstick every now and again just as much as the next man (or woman), but, as we all know, there’s a long-stemming stereotype about Black folks and their alleged love of fried chicken. Despite people from all walks of life enjoying this Southern delicacy, there’s still a negative connotation that comes to mind whenever I think of a person of color and chicken. That’s why I found it disheartening when I caught word last November that former Public Enemy hypeman turned reality TV star Flavor Flav (born William Drayton Jr.) was planning to open a chain of fast food restaurants dubbed Flav’s Fried Chicken.

I initially shook it off as one of those ideas that would never get off the ground, just another one of those “celebrityâ€ rants that would amount to a whole lot of nothing. Well, to my dismay, I found out earlier today that the first FFC franchise was real and officially open for business in Clinton, Iowa. In an almost seven-minute video interview, Flav explained how he and partner Nick Cimino got the business off the ground. I watched in disbelief as Flav broke down his deep-frying technique to a White journalist on site to cover the opening of the restaurant.

I’m all for entrepreneurship and people of color starting their own businesses; but something in this scenario just doesn’t sit well with me. A Black man opening a chicken shack in the heart of Middle America (read primarily White) seems more like a big joke, but I checked the calendar and April’s Fools Day is still two months away. Some could argue that this is better than another Flavor of Love “realityâ€ show; but is it really? Obesity, heart disease and hypertension are serious issues in our community, and here we have one of our own shelling out buckets of grease-soaked chicken. Why couldn’t we get a Flavor Flav Juice Bar or a Flavor Flav Organic Supermarket instead?

To make matters worse, Flav isn’t alone. A couple weeks ago Shawn “Jay-Zâ€ Carter, along with his mother, sister and first cousin, invested in Buffalo Boss, a Brooklyn, NY-based chicken wing restaurant. A part of me expects such moves from Flav, but I would have expected a bit more from someone like Jay-Z. It’s almost as head scratching as the Obama Fried Chicken that opened in Brownsville, Brooklyn in early 2009 as a form of “tributeâ€ to President Obama. I can’t speak for our Commander-In-Chief, but I’m quite sure he’d much rather a school or hospital named after him than a random takeout spot.

Perhaps I’m being too sensitive and reading too much into the politics of poultry but given the racial implications, and, more importantly, the health concerns associated with funneling more fast food into our community, I feel like there’s a problem with fried chicken that needs to be addressed. Actually, it has less to do with what goes into the deep fryer and more to do with the people that would rather serve up stereotypes than actual food for thought. If Flavor Flav, and those in positions of power like him, truly wants to be considered a keen businessman, I’d rather he do something that adds value to the overall health of the community instead of presenting another value(less) meal.

What are your thoughts on the racial connotations associated with people of color and chicken, as well as celebrities who endorse chicken franchises? Share your voice in the comments section.

FacebookTwitterYoutube
← In the News: At Least 35 Killed in Moscow Airport Explosion ← New Bank Fees? No Problem. You Can Still Get Free Checking
×