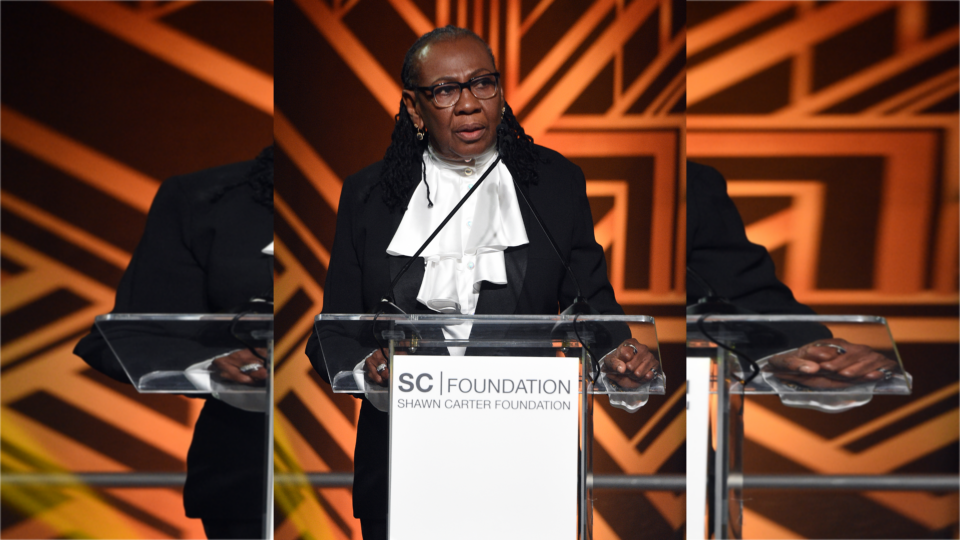 The Shawn Carter Foundation, co-founded by Gloria Carter and her son, Shawn “Jay-Z Carter,” in 2003, returned to Philadelphia’s Made in America music festival on a mission.

Last weekend’s festivities marked another year for the public charity to join other local and national organizations at Cause Village, a dedicated hub for social action, held at the Jay-Z-curated two-day concert.

At the event, the foundation set up a table and booth with hopes of engaging with high school students. They added an immersive experience including a Shawn Carter Foundation Instagram filter for students to see what kind of student they would become in college.

Class president or class clown? Level up your Insta with Shawn Carter Foundation’s IG filter. Vote now on our story & tell us what kind of student you are! @MiaFestival #CauseVillage @teamroc pic.twitter.com/lDWSG5XZCA

According to Rolling Out, Gloria Carter was dressed in an “I Am College Bound” Shawn Carter Foundation black T-shirt. She explained to the media outlet that students are discouraged to think that college is a viable choice for them if they had the necessary financial assistance.

“There are a lot of young people who have low GPAs,” Gloria Carter said. “A lot of those people don’t even get looks for financial assistance We can help those kids who can’t get any help.”

Since its inception, the Shawn Carter Foundation has amplified its efforts in helping “individuals facing socio-economic hardships further their education at post secondary institutions,” per its website. Multi-million investments and donations, garnered from The Shawn Carter Foundation Gala and beyond, have continued to support initiatives that empower youth and communities. They’ve also spearheaded college tours to HBCUs (Historically Black Colleges and Universities).

Jay-Z’s @ShawnCarterSF helped put me through undergrad at @SFSU where I studied TV broadcasting. This year, I was blessed to interview Mr. Carter in my first ever TV documentary that I directed. Life man 🙏🏾#FullCircle #JayZ #RocNation pic.twitter.com/EKcYabMfQA

By removing some of the financial burdens associated with college, the foundation strives to increase college access and success through programs including the scholarship fund, college prep and exposure, international exposure, professional development, scholar support, and community and goodwill programs.

Back in 2018, Jay-Z partnered with his wife, Beyoncé, while on the OTR II Tour, to launch a scholarship program to award one exceptional senior high school student with financial needs in the remaining U.S. markets along the tour; $100,000 was awarded toward each recipient’s college enrollment.