Wellness Insider: 5 Ways To Get a Good Night's Sleep 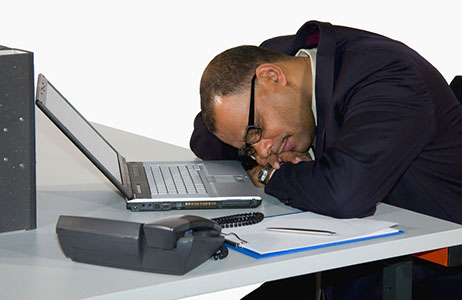 Deadlines and other workplace pressures may make a good night’s sleep seem like an elusive dream.Â  Nearly 60% of blacks agree that inadequate sleep affects job performance, yet only 25% say their workday routine allows for enough sleep, according to the National Sleep Foundation‘s Sleep in America survey.Â  This year the annual poll focused for the first time on sleep differences among ethnic groups.

“There’s a large body of evidence that shows fatigue, whether due to short sleep or sleep disorder, can affect [work] performance,â€ says Dr. Stefanos N. Kales, MPH, an associate professor at Harvard Medical School and Harvard School of Public Health, which were not involved in the Sleep Foundation survey released in March.

Neglecting sleep could grow your waistline and shrink your bottom line.Â  Sleep deprivation and sleep disorders cost U.S. employers at least $100 billion a year in lost productivity and absenteeism. And research, including a University of Chicago study released in 2004, documents a link between poor sleep and obesity.

Investigations into 1986’s Challenger space shuttle disaster and the Exxon Valdez oil spill in 1989 found that those who were making key decisions in both situations were working under extreme sleep deprivation. Inadequate sleep can contribute to mistakes at the office, too.Â  “In an office environment, [the effects of sleep deprivation] may be harder to measure, but you can see decrements in productivity and performance,â€ Kales says.

Here are some tips from Kales and the Sleep Foundation on how to get a good night’s sleep:

The Sleep Foundation’s poll found that African Americans had the busiest bedtime routines of the four ethnicities surveyed.Â  Blacks also were more likely to do job-related work just before bed.

For more information on changes you can make at work, the science of sleep, and more visit:

You Snooze, You lose

Check back in at the Wellness Insider next Wednesday for Part 2 on sleep and an interview with Dr. Craig Schwimmer, an expert on snoring and sleep apnea.