4 Secrets to Success From Mathew Knowles 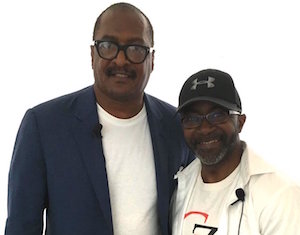 It is tempting to see Mathew Knowles as the creator and manager of Destiny’s Child, father to globally dominant entertainer BeyoncÃ© and younger sister Solange, and surrogate dad to the equally famous and accomplished artist Kelly Rowland. But the truth is, Gadsden, Alabama-born Knowles was a successful executive long before launching his company, Music World, in Houston in 1992. And, he’s hardly slowed down since his children have assumed adult responsibility for their own lives, families, and careers.

Additionally, Knowles holds B.A. and B.S. degrees in economics and business administration from Fisk University, an MBA from Cornerstone Christian Bible College for strategic leadership and organizational culture, and he is a visiting professor at Texas Southern University, where he teaches courses on the entertainment industry. Most recently,Â Knowles also earned a Ph.D. from Cornerstone Christian.

I sat with Knowles for an on-stage conversation in the Empowerment Pavilion of the 2016 Baltimore African American Festival during the Independence Day weekend, where he autographed copies of his new book, The DNA of Achievers: 10 Traits of Highly Successful Professionals.Â The following are four key pieces of advice he shared during out talk:

While Knowles’ built a successful 20-year career in the medical equipment sales industry, which included 10 years at Xerox, he never lost sight of the dream he had as a college undergrad; to create hit-making girl groups for the music industry.

“If you live your passion, you’ll never work a day in your life. What is that thing that you wake up in the morning thinking about? That’s what you should do; not the job, but your passion. It might take a minute, it might take five or six years–but success will come.â€

“It’s also important,â€ Knowles adds, “to have a plan to transition from a job to your passion.â€

2. It’s about preparation, not just opportunity.

Knowles didn’t just start a music company when he transitioned from his career in medical equipment sales; he became educated about the music industry.

“I went back to Houston Community College and took music management courses and music production courses,â€ he says, “because I believe education and knowing what you’re talking about are important. I applaud [those who] take every seminar they can, and get every bit of information they can. Knowledge is power.â€

3. Make business decisions, not emotional ones.

Knowles credits his time in corporate America with helping him to balance his roles as CEO/talent manager and father to his daughters, which he describes as “extremely difficult.â€

4. The lessons of success are learned through failure.

“Failure is an opportunity for growth,â€ Knowles insists, “not a reason to quit. Most people quit right before [reaching] success.Â Failure is a part of growth. I’ve never learned something from being successful. I’ve only learned when I failed.â€