[Feature] College Students Mentor Each Other About Money 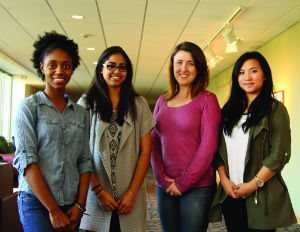 In Spring 2014, Kasaundra Jones had to choose between paying her college tuition atÂ St. Catherine UniversityÂ in St. Paul, Minnesota, and the payment on the new car she bought when she entered school the previous Fall: a 2013 Hyundai Elantra GLS that cost a little under $22,000.

“I have always paid a little over $1,000 a semester, until I hit a rough patch that resulted in me having to take a summer class to catch up to where I should be. Then I received a letter saying I owe $7,000 to the school,â€ says Jones.

“Most of the money I had coming in was from my grandfather. He would send funds to pay my bills and a little extra. I had an on-campus job, but I didn’t know how to budget, and I wasn’t conservative with my money,â€ says Jones.

Jones’ bank accounts were either at zero or overdrawn. Getting collection and overdraft notices were commonplace. Her grandfather was also having a difficult time keeping up with her financial needs.

Knowing something had to change, Jones went to St. Catherine’s financial literacy office, which is home to the school’s money management program and its peer-to-peer money mentoring service. It was there that she was partnered with Tiana Danforth, a trained money mentor of the same age and in the same grade as Jones.

“She constantly gives me answers to things I am totally clueless on, and that my grandparents (her legal guardians) don’t even have the answer to,â€ says Jones.

“I helped Kasaundra understand that when a bill goes to a collections office, there will be interest and fees,â€ says Danforth. “In addition, I helped her work out a debt repayment plan and a spending plan. She worked out that she would borrow a lump sum from her grandfather and pay him back in monthly increments. She would save interest and avoid the constant late penalties she was receiving, saving everyone money in the long run. In addition, she would give up her new car and get something with smaller payments,â€ says Danforth.

Danforth is one of four money mentors in St. Catherine’s peer-to-peer money mentoring program. The students get training at the school’s financial literacy office and earn $10.75 an hour.

“When we were first hired for the position we were trained by Wells Fargo, a credit counselor from Lutheran Financial Services, and therapists from St. Kate’s counseling center. From there we have been continuing to learn on our own and have attended different informational meetings from financial institutions such as Thrivent,â€ says Danforth.

In fact, a study by the National Education AssociationÂ found that when tutors were explicitly trained in the tutoring process they were far more effective, and the students they were tutoring experienced significant gains in achievement.