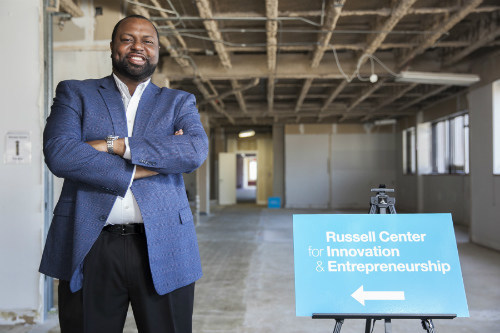 “Growing up in Atlanta, Herman Russell was one of my greatest heroes,” Bailey said in a statement. “I am honored to have this opportunity to build on his incredible legacy, paving the way for the next generation of doers, innovators and job creators.”

In November 2016, RCIE received $3 million from the U.S. Department of Commerce’s Economic Development Administration to fund the design and renovation of the existing building to house the center. The center will help create 50 new jobs and save 175 jobs, according to grantee estimates.

Located in Atlanta’s Historic Castleberry Hill neighborhood and currently slated to open late 2018, RCIE will house a 40,000-square-foot, world-class, entrepreneurial innovation and leadership center. Its mission is to empower entrepreneurs and innovators to create, invent, and learn while being engaged and motivated to develop game-changing new ideas to promote economic empowerment. Once completed, the center will act as a collaborative, co-working ecosystem that connects entrepreneurs to a customized curriculum, corporate partners, and access to capital. The new space will also support long-term disaster recovery efforts by adding economic resiliency to the city of Atlanta through increased economic diversification.

Founded in 2016 by the Russell family, the RCIE pays homage to the legacy of the late Herman Russell, who as founder and chairman of H.J. Russell & Co., transformed the skylines of American cities and international hubs, to create the largest black-owned construction firm in the nation with revenue north of $369 million in 2008. H.J. Russell is No. 14 on the 2017 BE Top 100 list of the nation’s largest black-owned businesses with revenues of over $253 million.

“Much more than another accelerator or incubator, we want RCIE to become the epicenter of economic advancement and entrepreneurship for under-represented communities across the country, and it’s so fitting that it will evolve in the former H.J. Russell & Company headquarters at 504 Fair Street on Atlanta’s Westside,” Bailey said.

Bailey joins RCIE with more than a decade of senior leadership experience in the nonprofit and economic empowerment space. He is the founder of Greenwood Archer, a private equity firm dedicated to reimagining the way America’s most under-served communities leverage assets, establish wealth, strengthen infrastructure, and create jobs. Before he launched Greenwood Archer, Bailey served as CEO for the Southeastern Region of Operation HOPE, a global nonprofit organization focused on financial literacy. Under his leadership, Operation HOPE’s southeastern region grew from a single-person operation in 2007, to 19 offices by 2015, helping more than 160,000 youth, adults, and families start businesses, buy homes, raise credit scores, and increase their financial dignity.

“We are excited about Jay’s addition to the Russell family. He brings the experience, passion and energy we believe necessary to lead the Russell Center for Innovation & Entrepreneurship from concept to reality,” said Jerome Russell, president of H.J. Russell & Co. and chairman of the RCIE board.” The Russell Center will be a game changer for entrepreneurs in the city of Atlanta and beyond, connecting the next generation of revolutionary entrepreneurs to the tools and relationships needed to turn dreams into reality,” Russell said.

Recognized by three U.S. Presidents for his leadership and community efforts, Bailey was one of eight Americans honored at the White House in 2012 as a “Champion of Change: Following in the Footsteps of Dr. Martin Luther King, Jr.” He was also named to both the Atlanta Business Chronicle and Georgia Trend magazine’s “40 Under 40 Best and Brightest Leaders of the Future.”

An Atlanta native, Bailey is a graduate of Leadership Atlanta, Leadership Georgia, and the ARC Regional Leadership Institute.