How Princess Leia Influenced This Woman in STEM 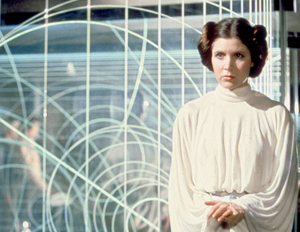 While the world mourns the loss of Carrie Fisher, the iconic star whose portrayal of Princess Leia brought to film the first female action/sci-fi hero (and sadly, her mother, Debbie Reynolds, a day later), I think about how Princess Leia influenced my career.

Fisher’s character, and so many others–Star Trek‘s Lt. Uhura, Ellen Ripley from the Aliens franchise, and more recently the trio (plus Leslie Jones) that made up the cast of the new Ghostbusters–are great examples of women achieving in large part, because of their STEM skills. These movies and characters are odes to women using their brains and skill sets to problem solve–and not wait for some man to help.

When I was a kid, there wasn’t the big push to get kids, especially black girls, interested in computers and science. There certainly weren’t the wonderful organizations that exist now like Black Girls Code.

But there was Star Wars. And Princess Leia. And sci-fi.

When Return of the Jedi came out in 1983, I was mesmerized. I was a little on the young side to have seen the original Star Wars and The Empire Strikes Back, but each was shown on cable around the timeÂ Return of the JediÂ  was released. I ended up seeing all three movies no less than 25 times–that’s each movie!

My bedroom was a shrine to Star Wars. I have every Star Wars comic book Marvel released. I could recite the lines from each movie, and I became very fluent in all things Star Wars.

That obsession led to an obsession of all things sci-fi, which led to an interest in robots and then computers. I knew by the time I was in my late teens, I wanted to work with technology in some capacity. Star Wars lit a fire in my imagination, and for a kid who came from a modest background in East New York, Brooklyn, that imaginative fire (and a very encouraging father) took my dreams and aspirations to new heights.

I did end up working for years in information technology. Computers still fascinate me. These days, I cover tech as a journalist, and I am fortunate to often get access to the latest, most wild tech creations from other dreamers, innovators, and tinkerers.

I will always love sci-fi. This movie genre was the first to really embrace the female as an action hero–a hero not through her brawn, but through her smarts. And Carrie Fisher set the course.