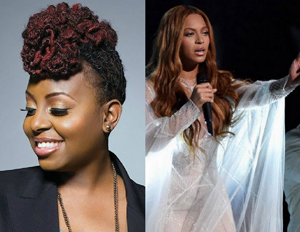 BeyoncÃ© made Grammy history last night as the most nominated female artist of all time, but she also ruffled a few feathers when she chose to sing Thomas Dorsey’s “Take My Hand, Precious Lord.” The gospel classic has been performed by vocal greats Mahalia Jackson, Aretha Franklin, KellyÂ Price,Â and more recently, Ledisi.

Ledisi plays Mahalia Jackson in the movie and sings the song for its soundtrack, however, she was not tapped toÂ perform it last night as part of the Selma set, which also included “Glory”Â by Common and John Legend. Instead, BeyoncÃ© performed the number in an all white ensembleÂ with the help of a male choir.

On the Grammy red carpet, Entertainment Tonight caught up with Ledisi to ask “So why aren’t you singing that song?” The vocal powerhouse responded, “I don’t have a clue, but I will say what I’m excited about is thatÂ I had the pleasureÂ  of playing an iconic figure in Selma.” She continued on to say how “Take My Hand, Precious Lord” had been a timeless number, sangÂ by “…the Queen Mahlia, the Queen of Soul Aretha Franklin, then I was able to portray and sing my version of the song.” As far as her feelings on what many considered to beÂ BeyoncÃ© stealing her moment, she responded, “I mean, herÂ generation will now know the song, so I’m a part of history. I can look atÂ it like that instead of looking at itÂ as a negative. To me it’s a great, great honor to be a part of the legacy of a great song by Thomas Dorsey.”

According to ET, John Legend revealed that BeyoncÃ© approached him and Common about doing the song as an opener to “Glory.” “You don’t really say no to Beyonce if she asks to perform with you,” the singer said.

Conversations surrounding the controversy are still circulating on social media. BeyoncÃ© has not made any statements in response.